This guide covers Enchanter basics up to the Omens of War expansion.

Enchanters are the primary CC class.  They have a enormous palette of CC tools such as Mez, Root, Charm, Pacify, Mana Drain, Memory Blur, Stuns, and Slow. They provide highly sought-after haste and mana regen buffs. They can illusion themselves and in later expansions other players as well. Enchanters are an intellect based class.

Enchanters are the by far the strongest grouping class in early EQ. Their ability to charm mobs allows them to create strong pets that deal massive damage when hasted. These charmed pets can also be used as a tank on any mob that doesn’t have MoTM (Mitigation of the Mighty). In many cases they can tank better than an actual tank, especially in early EQ.

Generally it’s best to focus on getting as much AC/HP/Stamina as possible. This is to survive your pet damage when charm inevitably breaks. In early EQ you’ll want to get Intellect and possibly Charisma as well. Intellect will increase your mana pool and increase your chance to raise skills. Charisma raises the success rate of charm and mez spells (although it’s impact seems to be small).

Mana and base stats get easier to obtain as more expansions come out so eventually they’ll all be maxed and you’ll be focusing on AC and HP.

Also be sure to get Flowing Thought (Mana Regen) max of 15 (before AA).

Focus Items become active in Luclin and Enchanters will need a few different ones. They have different names depending on the era and specific item, but the description will tell you what they do. If you have two of the same type they will not stack; the highest one will be used. You’ll want to get the following:

– Extended Buff Duration – Great for your Haste and Clairty line spells. People will often pay you to buff them with these so the longer they last the better service you are providing.
– Extended Cast Range – Allows you to cast from further away
– Mana Preservation – Lowers mana cost of spells by a %
– Spell Haste – Lowers cast time of spells
– Direct Damage Mod % (for Magic-based DD spells)
– Increased Detrimental Spell Duration – Increases mez, DoT, and tash line duration (Magic Resist debuff) duration, doesn’t work on charm.

These provide a boost once they are available in Plane of Time+. If you raid, your base stats will likely already be maxed out from gear and AA. Heroic Stamina and Agility will have the most noticeable impact because you will become much tankier. HIntellect is good too but not as good as HStamina or HAgility.

Heroic Agility – Avoidance – Enchanters will gain avoidance AC from this.

Enchanters get two major buff lines: Clarity Line (Mana Regen) and Haste. Below you can see the spell line for each up to level 70. They also get Runes, Magic Resist, and Aggro Modifiers. 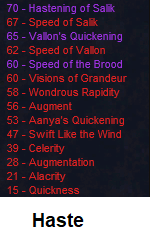 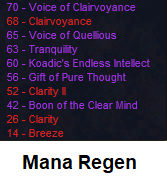 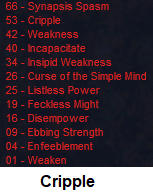 **Note – Some of the Enchanter DoT’s perform a stat debuff or mana drain as well.

Enchanters have a huge amount of Crowd Control tools:

Shielding – This gives HP/AC/Magic Resist.
Enchanting/Imbue – Enchanters can Enchant Metal and Imbue Gems
Pets – Enchanters get low HP pets (when not charming). Enchanter Pet Guide
Magic Direct Damage and DoTs – Low damage compared to other casters but better than nothing
Illusions and faction modifiers – Turn into different races and also adjust your faction with the “Alliance” spell line.
Invis, Invis vs undead, Levitate, and Underwater Breathing buffs
Enchanters get a damage shield spell (Spell: Feedback) at level 25. This is useful early game or to cast on low level players.

Enchanters should specialize in Alteration (buffs, charms, debuffs) or Conjuration (Mez). You can even do Evocation if you nuke a lot. Your choice depends on how you use your character and what era you’re in.

An under-geared Enchanters biggest issue is going to be  survivability on charm breaks. In early eras you’ll also lose mana quickly if it breaks a lot due to needing to re-charm.

Some priority Enchanter AA are:

Color Shock (OoW+) – Chance to stun attacker when melee’d
Mind over Matter (OoW+) – Take mana loss instead of HP loss when taking damage, has a max amount of hits

– Get an invisibility item so you can break charm on demand. Some good options include:
— Goblin Gazughi Ring (Instant cast Invis vs Animals, you must target yourself, level 5+) – Lake of Ill Omen from a sarnak courier
— Ring of Stealthy Travels (2 sec cast Gather Shadows, req level 49+) – Chardok from Interrogator Gi’Mok
— Opaline Charm (3 sec cast Gather Shadows, level 55+ req) – Ssraeshza Temple from Vyzh’dra the Cursed
— Boots of the Mosquito (Instant cast self only Invis vs Animals, level 51+ req) a virulent mosquito from Temple of Cazic-Thule 2.0 revamp

– Blue Ceramic Band (Made with Pottery) is good for casting a small DD to break mezzes on demand. It is also good to do a few damage to a mob when killing with charms. If only your pet hits the mob you’ll get less exp.

–  The 1.0 Enchanter Epic isn’t necessary, but is nice as it has a clicky haste that can be cast on level 1’s

– The 2.0 Epic isn’t super useful when compared to other classes, but is still BiS for OoW

– Keep your self-rune up. It generates some aggro so be careful if your tank doesn’t have aggro

– Grab a Serpent of Vindication from Tallon Zek in Plane of Time. It has a fantastic clicky slow which is good for many expansions

– Grab Elemental Pants from Elemental Planes and/or P3 Time – Has Haste clicky. Can click on others

– There are several clicky Clarity items, these are good for when you just get rezzed after a death:
— Clarity (Rod of Infinite Thought) –  PoHate from Coercer T’Vala, also Velious quest pants
— KEI (Wand of Tranqulity) – Vex Thal from North Blob (Enchanter’s group only)
— Tranquility (PoP Ornate Pants) – Enchanter’s group only
— Aura of Quellious (Dusty Cap of the Will Breaker) – LDoN Prison Break raid (cast on anyone, even level 1’s). Same mana regen as Voice of Quellious (PoP Spell).