This raid is given by Aganetti the Keeper in Qvic. Cynosure Kvanjji must be dead in order to request this event. You need a minimum of 6 players to request it. 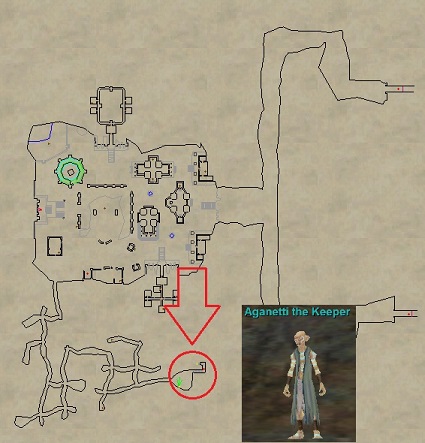 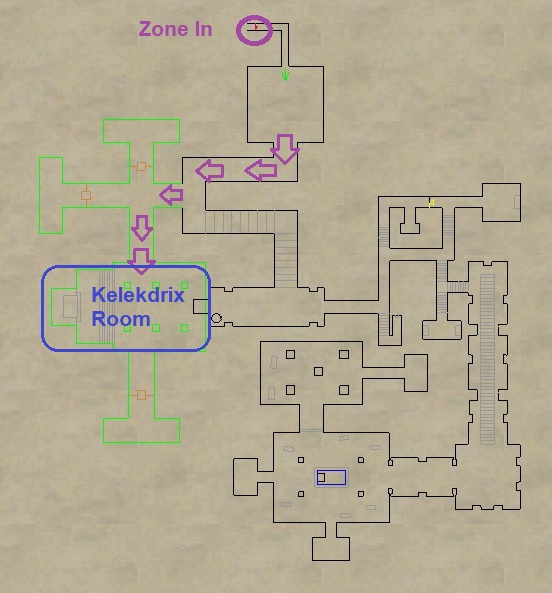 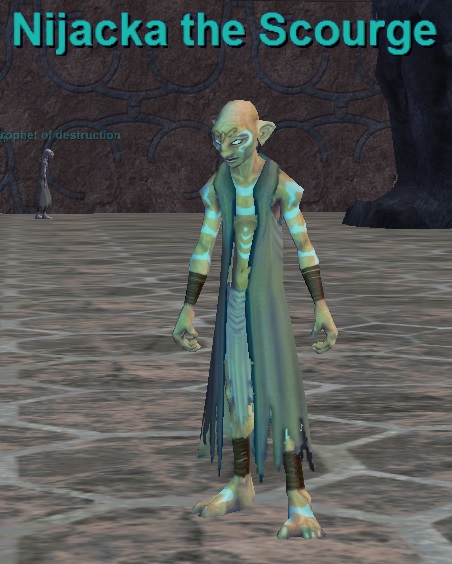 Once you get past Step 1 you’ll be at Kelekdrix, Herald of Trushar’s room. Clear all the trash out of his room. Be aware on the far east side of this room is a trap in the floor that you can fall through. Ensure nobody falls through this.

To start the event, speak to Servant of Kelekdrix on the south side of the room. Say “consequences” to begin.

Kelekdrix, Herald of Trushar will become attackable. The general idea here is to kill Kelekdrix until he becomes unattackable. When this happens adds will spawn in the room. They shadowstep around and have some nasty AE’s (see below). AE heals will be needed. Disease cures will be needed. DPS will need to kill them ASAP. Once adds are dead Kelekdrix will be attackable again. Repeat this process until he’s dead.

Kelekdrix also will banish people to the pit (below the trap floor). If someone gets banished it’s best not to move as the path back up will have a bunch of mobs in the way. You can Call of Hero them back up. From my experience running this dungeon a couple times, he seems to banish the tank. So keep backup tanks ready.

Once defeated, a pile of bones spawns on the ground at his spawn location. Don’t forget to loot! 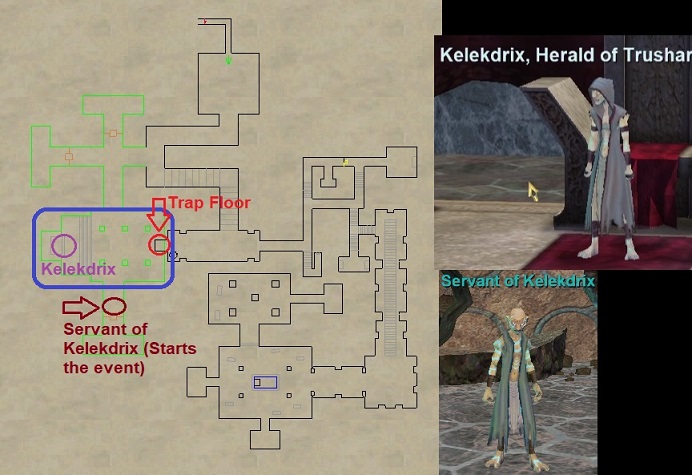 Next room is the pit. The entire raid can drop down the Trap Floor at this point. The named Mimezpo the Oracle may spawn (doesn’t always). If it does you can get some bonus loot. Just clear the trash out in this room, making your way east. Once you attempt to open the east door the 2x a clay monoliths attack. 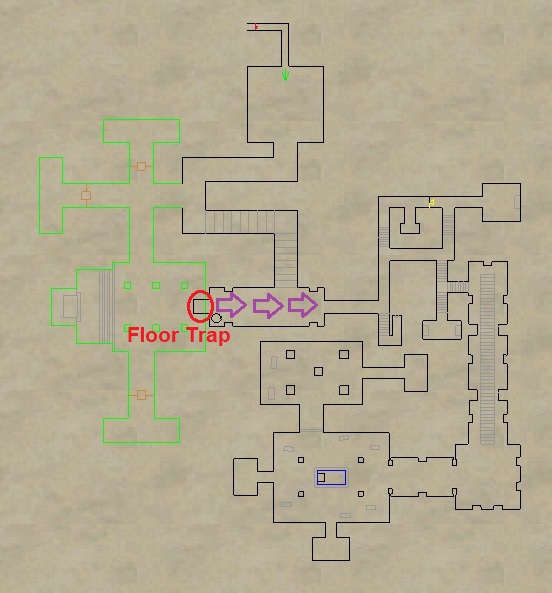 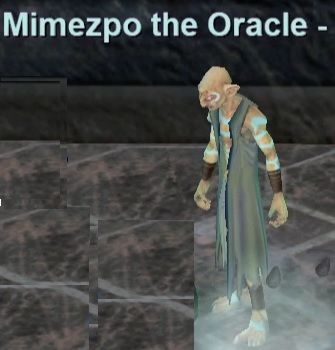 The next area is a series of hallways that has 4 exile NPC’s in different rooms. You need to speak to all 4 of these Exiles at the same time unlock the door to progress. The hallway also has root traps throughout it that need to be disarmed. “stonemite” type NPC’s also spawn in groups. See map for the Exile locations: 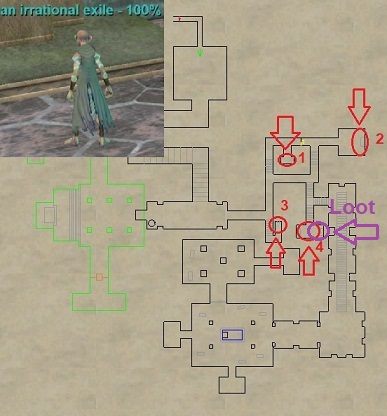 If your raid is fairly strong you can split the raid into 4 groups. Each clears to their own room. If needed you can have the raid move as 1 giant force and drop a group or two off at each Exile while the remainding people keep clearing to the next room. Clear stonemites and disarm traps along the way. stonemites don’t have much HP (10K – 15K).

Once you have a group at each Exile. Have one person at each Exile Say “awaken me from this nightmare” to it. All 4 people must do this at the same time to unlock the door. Make sure to loot a pile of bones once completed. See Map.

In the next hallway is a series of a clay monolith’s. Just clear these out. They hit hard, normally come in packs of 4, but can be split to make them more manageable. They AE rampage so spread them out. 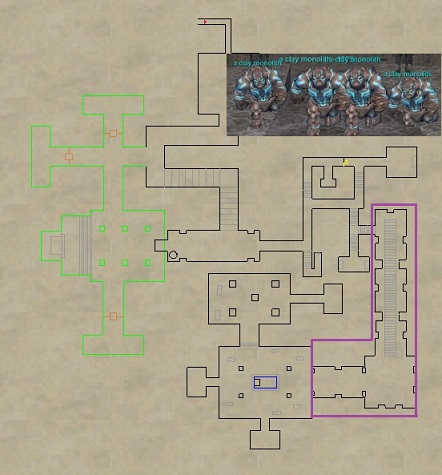 The next room is an event. You’ll see x6 Cursecaller mobs in front of tombs around the room. You’ll also see Noqufiel in front of the pool. Say “plan to kill me” to him start the event. Once started the x6 Cursecaller’s become targetable. They are permarooted. The overall goal is here to kill all x6 Cursecallers, but this is easier said than done. 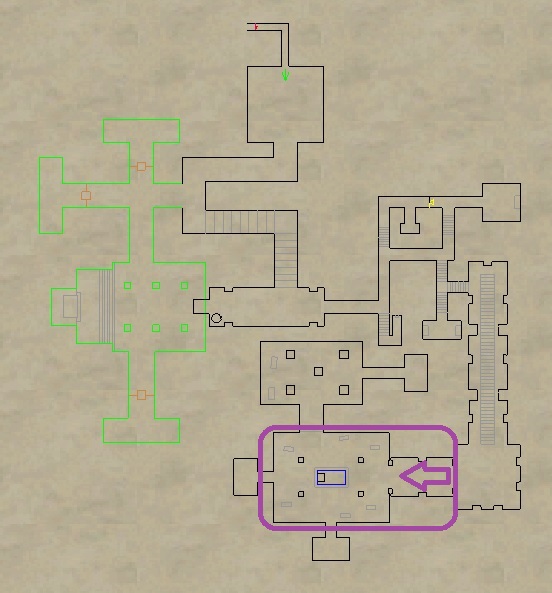 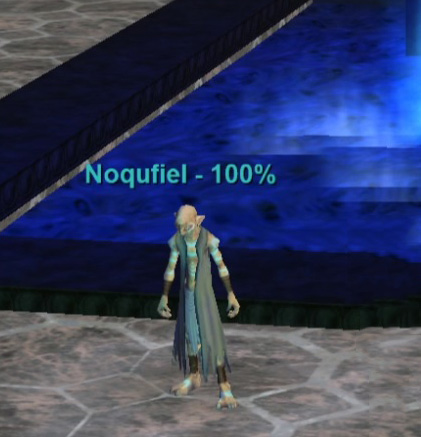 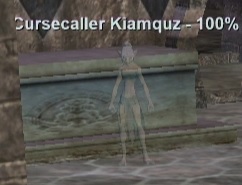 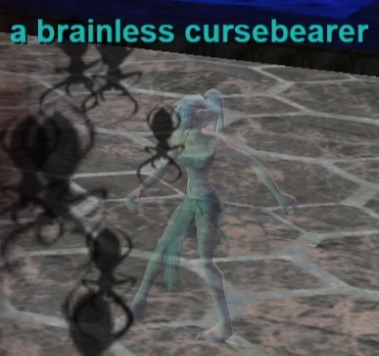 In addition to the Cursecallers, several trash mobs (cursebearers) will come out of the side rooms. These cursebearers can proc a Death Touch (100K, unresistable) if they hit you. When they come out of the room they pick a target at random. If you’re chosen you’ll see the emote:

When you see this you’ll need to kite the cursebearer that is following you. I believe it will eventually pick a new target (unconfirmed). You can kill them as well if you wish as they only have 10K HP,  just don’t get hit. They do respawn though.

Additionally, the 6x Cursecallers will cast a bunch of single target and unresistable spells on players making things more difficult:

Healers will want to have Curse Cure ready go to for all of these. 45 curse counters on each debuff. Each of the 6x Cursecallers have 400K HP. Kill all 6 of them to complete the event. All trash mobs will then despawn. Make sure to loot a pile of bones where Noqufiel was originally standing. 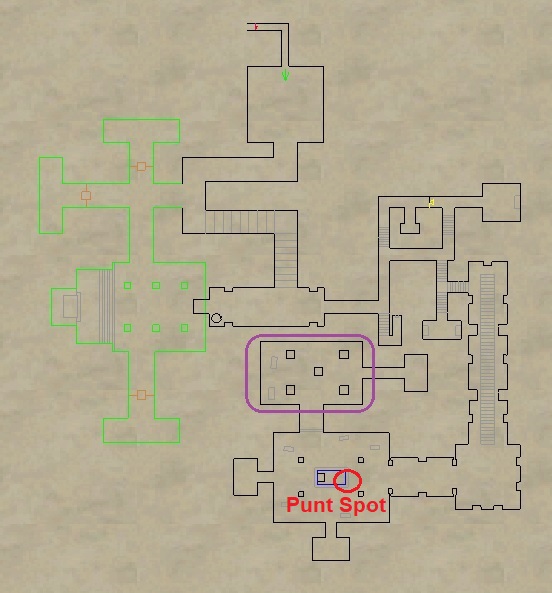 Turn off damage shields for this event. 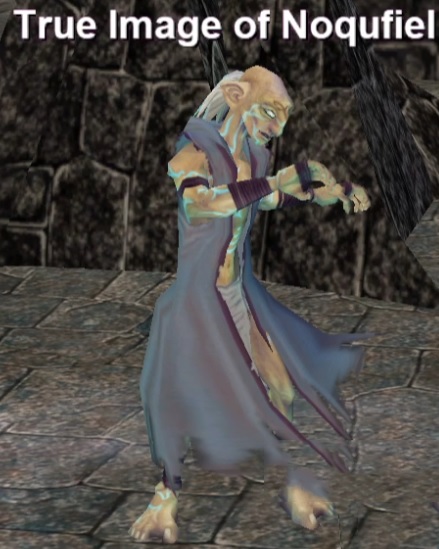 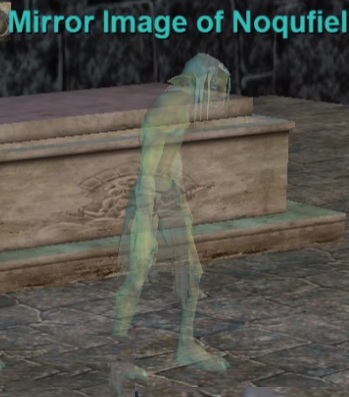 Additionally, death touch mobs will wonder in from the Cursebearer room (same mechanics as the event in Step 6). You’ll want to consider assigning a couple people to kill these when they come in. Stay away from their melee range are targeted. These mobs have low HP.

Noqufiel will also proc a punt on its target and send them to the previous  room. If this happens they will need to open the door to get back into the room. Sometimes this door can be locked (not sure what causes this, further testing needed). Opening the door can trigger the spell Searing Heat (Single Target, 2000 DD, -300 Fire Based) on the person who opens it. You may just need someone to open it from the inside (further testing needed).

Everyone will also want to have levitation as the boss casts a nasty Knockback that can potentially kill you with fall damage if you get unlucky.

– Hits 1600+ (35 Heroic Stamina)
– Estimated 2 million HP
– Cannot be slowed
– Casts knockback (Levitate your raid)
– Max Fire Resist out for this fight
– Do not damage the Mirror Image of Noqufiel or an AE will go off (Turn off damage shields)
– Always kill True Image of Noqufiel. The two bosses reset aggro and go back to their spawn point every 5-10% or so
– Kill adds as they come in. Kite them to avoid getting Death Touched
– The bosses target will periodically get punted to the previous room. Have someone monitor the door from the inside to let the punted player back in. The door can do a 2000 DD and can sometimes be locked (further testing needed)
– Bosses proc a minor lifetap

Additional Thoughts: You may be able to do /target Noqufiel_00 and /target Noqufiel_01 (Similar to Vallon Zek in Tactics) to see which is the “True” one ahead of time. This is 100% speculation at this point and will need to be tested. 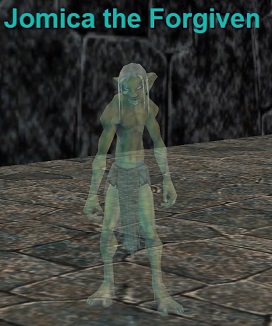 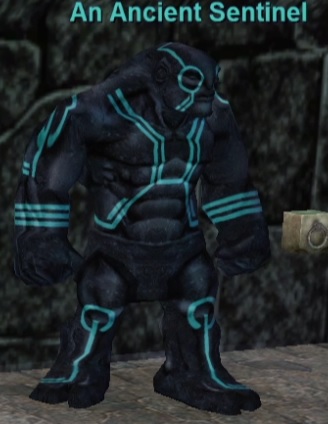