This is a crowd control oriented fight.

When you approach the event room area you’ll have some trash to clear out in the purple room (see map). Once clear, open the door to the blue room (see map) to start the event. Ukun Bloodfeaster and about a large group of stonemites will immediately rush out into the purple room. You may want to have a Ranger Weaponshield or Warrior Furious engage to start off to buy time get all of the adds under control.

The stonemites are level 53-54 and can be AE mezzed. Have enchanters be ready to mez them ASAP.  3x an ukun maulers also spawn, make sure to get tanks (or mez) them as well, they are not overly difficult and can be slowed. Some are above level 68 so may not be mezzable. 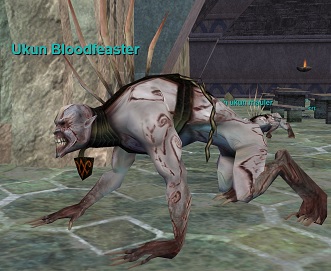 Have a tank ready to pick up Ukun Bloodfeaster also. Get all adds under control. Every 35 seconds, approx. 12 additional stonemites spawn and rush the room. Enchanters will want to get them AE CC’d.