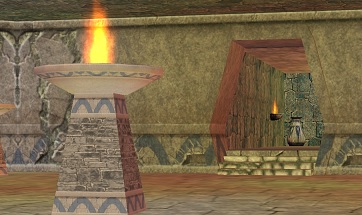 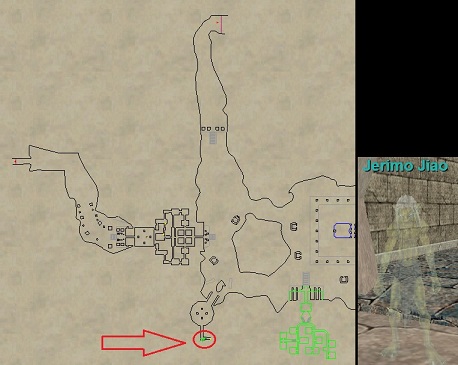 Aura of Destruction. This AE goes off every 90 seconds and will land on all raid members. It is pointless to cure it as it has approx 300 counters and will recast anyway, so we’ll need a way to get rid of it.

As you kill trash mobs clearing the hallways you’ll notice some TEMPORARY items drop. Raid members can equip these to become immune to

Aura of Destruction. There are different items based on your class type. Prioritize giving them to important raid members first. They are Ranged slot usable so that’s typically the best slot to put it in. They are NO TRADE on most standard servers.

Kill all trash along the way.

2) Whenever a raid member dies in this dungeon a vengeful spirit will spawn in its place. These trash mobs can be nasty. They proc Spirit’s Touch. These adds can cause the raid to spiral out of control quickly so it is important to play safely here.

3) There are “traps” in the hallways throughout the zone. When clearing trash mobs be aware that there are extra mobs will spawn from these traps and path around. Make sure to kill all mobs in the zone as you go. If you don’t you may not be able to proceed at certain points. The traps do not appear to respawn.

Once you approach the first big room you’ll see Spectral Trushar Worshiper in the water. Kill him. He drops some quest items for the Cragbeast Queen Quests. He hits 1200+ and is slowable and has approx 100K HP.

Note: You can chain farm this guy if needed by dropping and requesting a new instance after killing him. He is also charmable. 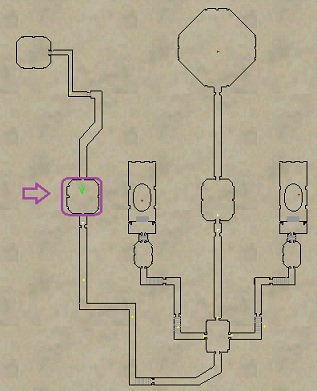 The next room is a small cubby known as “Gas Chamber 1“. Make sure your entire raid is in the room before attempting to proceed or clicking on anything. In this room you’ll see 4 keys on the table.

Your raid will begin to get emotes about the keys on the table (more on this soon). Each key is different and you’ll need to use the correct one to open the door ahead. If you choose the wrong one

Detonation will go off. This is a PBAE that does 4500 DMG (-350 Fire Based). It can go off multiple times from 1 wrong click so it can take out a raid pretty fast.

Have 1 person in the raid as the designated Key Master. This person will use one of the keys on the table on the door ahead based on the emotes the raid receives. You put the key in your inventory and click on the door. If you have more than 1 key in your bags at a time you will not be able to open the door unless you put it on your cursor and press “U”. The keys on the table respawn approx. every 50 seconds so if you need to throw them on the ground don’t worry too much.

If you click the door with 4 in your bags but don’t put one on your cursor and press “U” then you’ll get this emote:

Emotes will be sent out to players at random so your raid will need to communicate with each other quickly. If you are too slow and click the door after another emote goes off the raid will get hit with

Two  of the emotes can be ignored:

Two other emotes indicate which key will open the door. One will give an option of two keys, which gives you a 50/50 chance at choosing the right key (from what I can tell):

The other gives you the correct key:

If successful the door will open and you can continue. 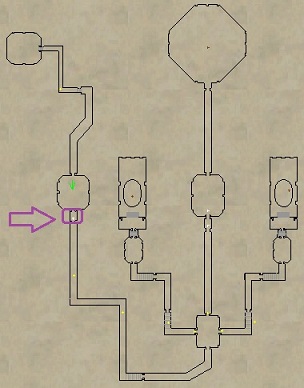 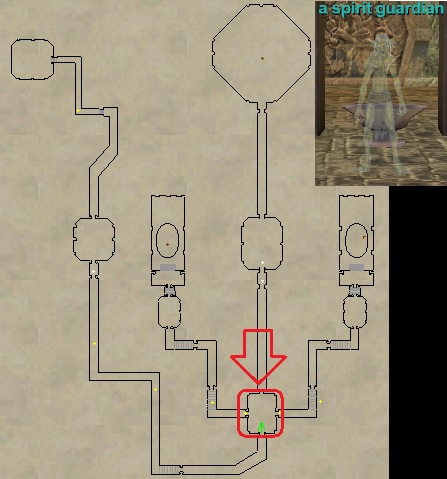 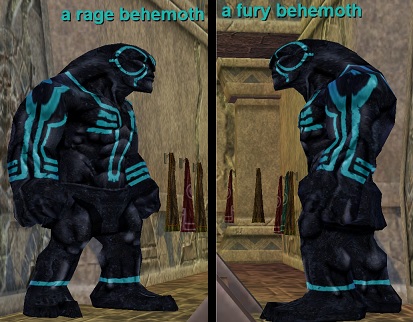 Say “ready” to a spirit guardian to trigger the fight with the behemoths. They both attack at the same time so be ready with multiple tanks. Kill them both to open the east and western doors of the room.

1) Clear the trash in the eastern and western hallways. At the end of each hallway are 4x constructs. These guys are tougher than the regular trash mobs. They are of similar difficulty to the 2x behemoths in Step 3.

Warning: The constructs respawn after sometime (Approx. 30 minutes). When they do the named are no longer attackable until these constructs are killed again. 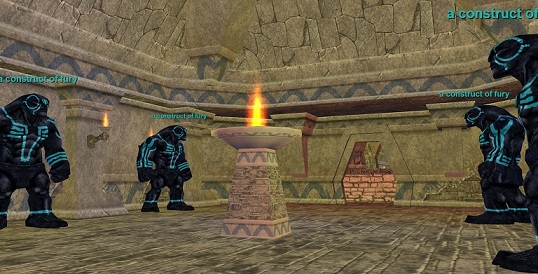 2) Once all the trash is clear in both hallways split your raid into 2 groups and assign them to the east and west rooms (see map). There is a boss on each side. 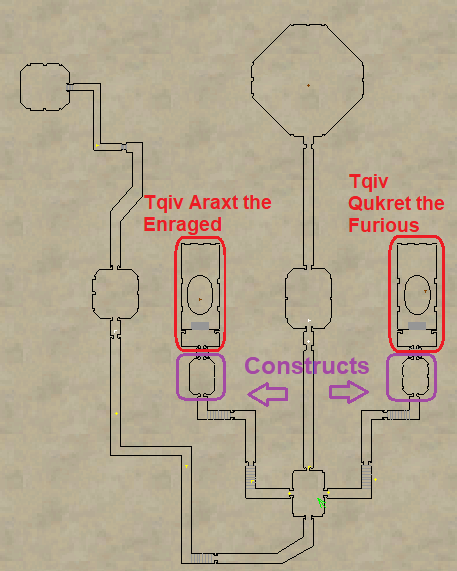 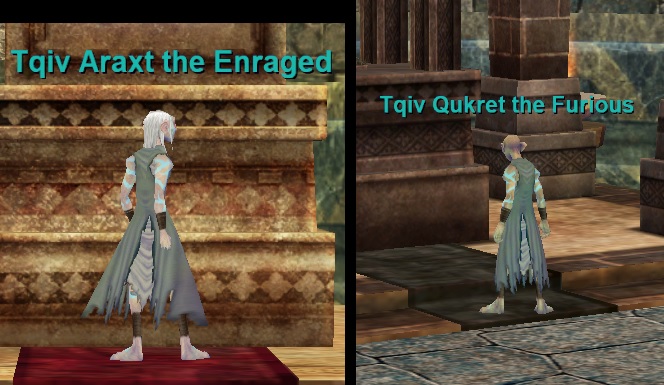 Once one dies, the other needs to die within 30 seconds or it will get substantially stronger. They are leashed to their rooms.

3) When both bosses die, a ground spawn will spawn under each of their initial spawn points. Have a person loot each. It does not have to be the same person. These will be used in Step 6. 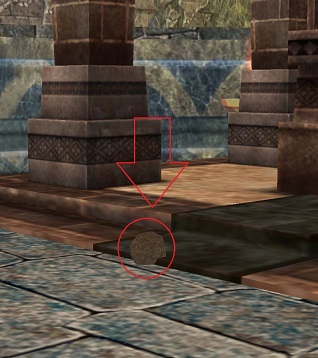 You can now advanced to the final center hallway. Clear trash until you reach the next room. Half way up the hallway is Gas Chamber #2. This works in the same manner as the Gas Chamber #1 in Step 2. However the keys are in a different place on the table. 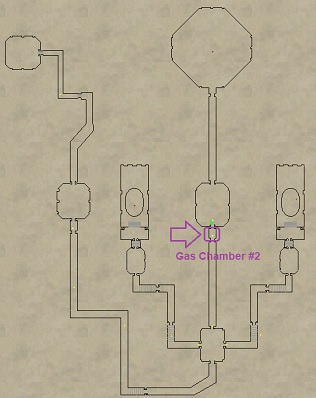 1) Once past the Gas Chamber #2 you’ll be in a room with non-aggro 3 mobs. You will want to turn in

Orb of Fury and

Orb of Rage into each of their respective mobs (Specter of Fury and Specter of Rage). Doing so will spawn 7x trash mobs. Kill them and head into the north hallway. 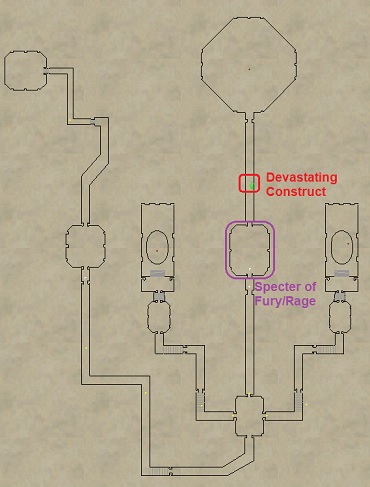 2) You’ll see Devastating Construct in the north hallway. Kill it.

Note: If you didn’t kill all mobs in the zone (including hallway traps) prior then Devastating Construct may not spawn. 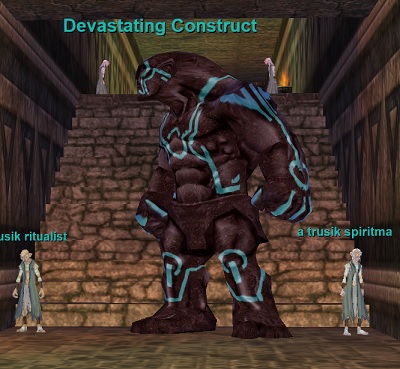 In the northern most room is the final boss. You’ll see Preshna the Lost in front of the door. Say “ready” to open the door and start the event. 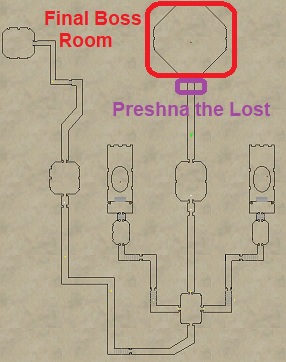 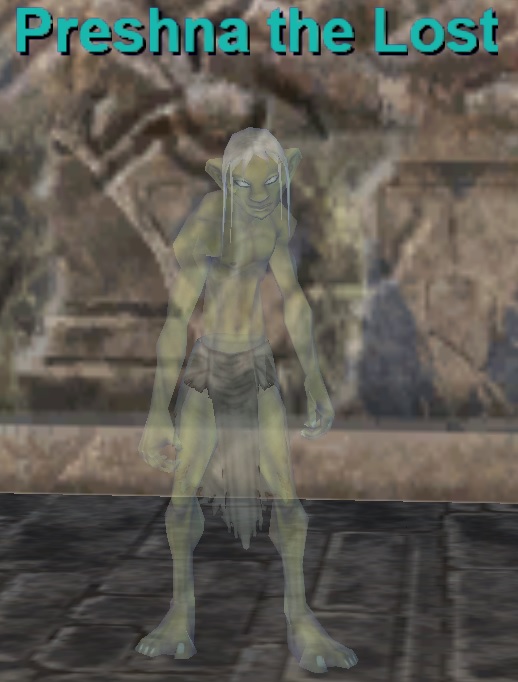 Guardian of Destruction procs a Feign Death on the tank so be ready to have multiple tanks on him. Additionally, Withering Destruction will hit various raid members randomly.

When Vrex Barxt Qurat is at roughly 40 HP% 2x a destructive channelers spawn. Keep them away from the raid and kill them after the boss is dead. They cast several nasty spells, so you may want to have a knight team kite them away while the rest of the raid finishes off Vrex Barxt Qurat.

When complete Specter of Barxt spawns on the shrine. Hail him to receive

Fragment of the High Temple! This is part of the Qvic and Txevu flagging process. 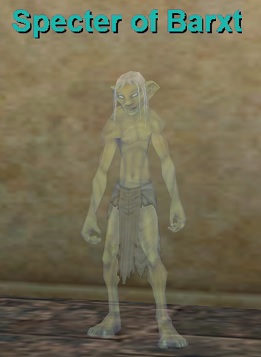