For this guide I have broken the Monk Epic up into 4 sections:

Robe of the Whistling Fists

Robe of the Whistling Fists

Robe of the Whistling Fists you must first get 3 items:

Robe of the Lost Circle

You can obtain these items in any order.

As of 2/17/21 Patch:
–  Increased the chance for Targin the Rock from 5 percent to 15 percent and Raster of Guk from 2 percent to 10 percent.
– Brother Zephyl, Brother Qwinn, Ran’un, Brother Velan Torresk, and Thena Lonnes have grown in strength. They are much more dangerous. Also, persons killing these folks will be greatly disliked by monk factions.

Brother Velan Torresk
– This NPC is not attackable. Patch Notes should not have this guy in there.

Robe of the Lost Circle

The first option involves completing a long sub-quest. It involves Tailoring, farming multiple rare named, and lots of running around. I recommend avoiding this path unless you have absolutely no guild or anyone who can help you. I will not be going into details on this path since Option 2, which also can be long, is more time efficient.

Update: As of 2/17/21 patch. This path still seems to be longer than Option 2 so I still recommend Option 2, especially if you have friends or a guild to help. The “Brothers” are slightly harder to kill than before this patch, and give a -500 faction hit, but there are ways around it. See Option 2 for details. If people request I add Option 1 then I may in the future.

They on the similar difficulty level as the old-school Guild Masters. You will need melee to kill them as they resist almost all spells. In Plane of Time gear, a Tank class with a Melee class should be able to kill them. Prior to PoP you may want to bring a few more people.

You will also get a faction hit -500 Ashen Order when killing one of these guys. You also can have other players kill them for you to avoid the faction hit. Or you can just FD right before he dies and have someone else finish it off.

You can kill orcs in any of the zones below to raise faction (1 point each). There are a few orc camps in each of the zones. I am not sure what faction level you need but its not higher than Amiably (100), which is where you start as a level 1.

You should be able to get your faction back in a few hours or less. However, if you took multiple faction hits then it will take much longer. These are all noob orcs so the respawn is pretty quick (less than 5 minutes typically). There may be faction quests you can do but orc slaughtering is probably the fastest method here.

**Another potential option to get around the faction hit is to use sneak for the rest of the quest for turn-ins. Although I have not tested this personally. Do so at your own risk. **

Brother Zephyl’s PH spawns in the Hill Giant area of Rathe Mountains. It will then roam on a specific path. Brother Zephyl has 4 PH’s: a drake, a grizzly bear, Hasten Bootsrunner, and Maldyn the Unkempt. The PH respawn timer is 5 minutes. After the PH spawns, it will immediately begin pathing out of the Hill Giant area. This is the best indicator that you have found the correct PH. Brother Zephyl is a rare spawn, and the robe does not drop every time, so it can be a long camp. It seems to be somewhere between a 20% and 40% drop rate. He will be wearing a red robe when he has it. Otherwise he will have a Wu’s Tunic graphic.

Brother Zephyl’s PH will spawn in the circle and follow the red solid line. 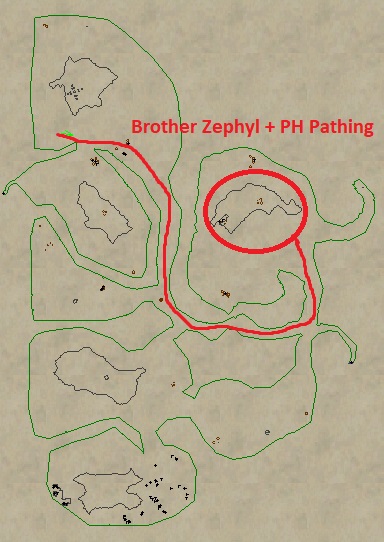 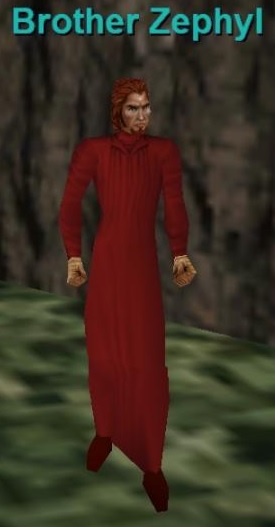 You can also get the robe from Brother Qwinn, who spawns in South Karana. He can spawn anywhere on the West side of the zone. He mostly spawns near the Splitpaw area somewhere. A tracker is not mandatory, but makes things substantially easier. He may have a specific PH, but nothing that I have seen is proven. I have farmed the robe 7 or 8 times, and find its best to just kill everything in the red box, specifically mobs that run north to south. He is a Rare Spawn, and just as Brother Zephyl, the robe does not always drop. He will be wearing a red robe when he has it. Otherwise he will have a Wu’s Tunic graphic. Expect to spend some time getting this robe regardless of which Brother you choose to camp. 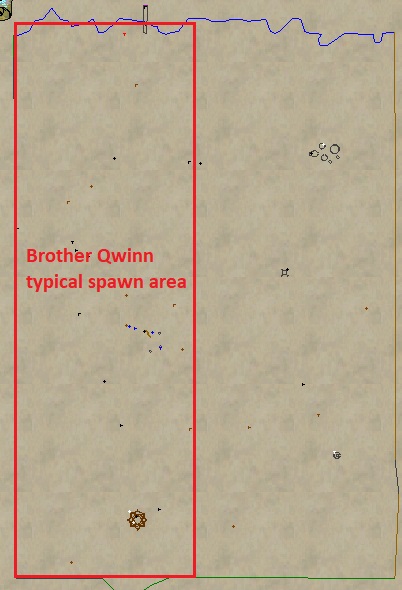 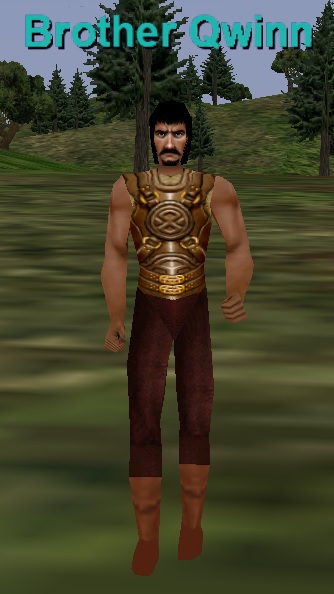 This drops in Karnor’s Castle from a drolvarg pawbuster, who spawns in the Warlord’s room. PH is a drolvarg bodyguard and a Drolvarg warlord. Rare spawn. Always drops.

The map for Karnor’s Castle is a huge mess, so I took a screenshot of the Warlord’s room only. I have only seen a drolvarg pawbuster spawn from the left mob along the back wall, but you’ll end up clearing the whole room anyway since everything assists. 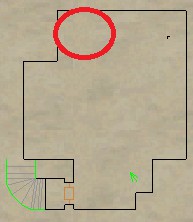 This drops in Chardok from an iksar betrayer, who has a specific PH along the outside wall of the bridge in The Bridge Keeper area. PH’s will include various chardok-themed mobs (sarnak, chokidai, etc). Rare spawn. Always drops. 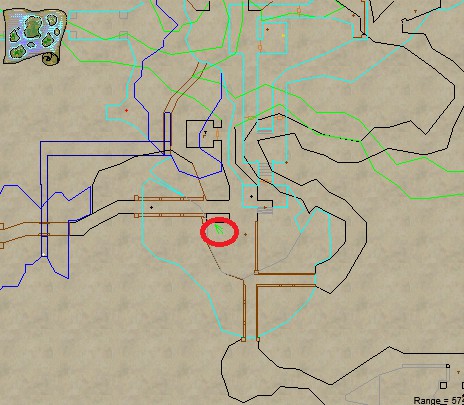 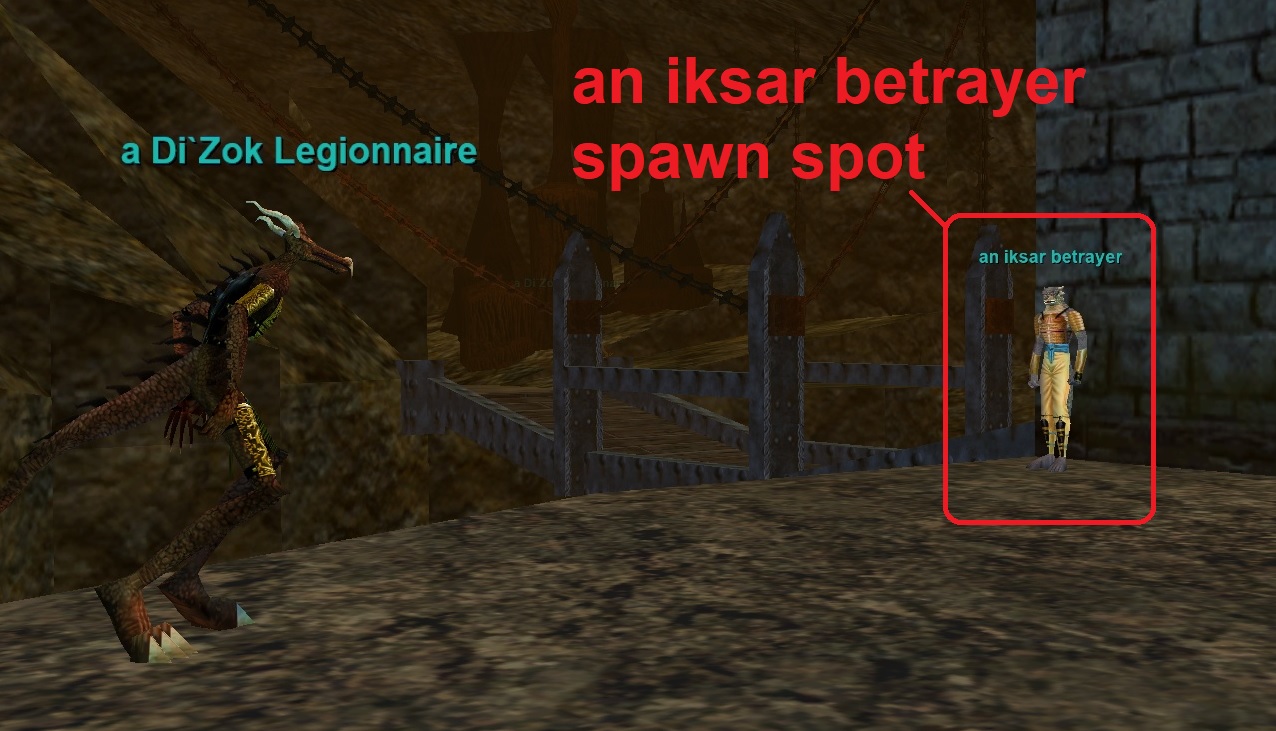 After all 3 items are obtained, head to Dreadlands and find Brother Balatin on the west side of the zone. His PH is a skeleton on top of a small wizard spire. 5 minute respawn. He spawns fairly frequently. He is KoS so you either need to sneak behind him and turn in the items while he’s indifferent con, or have someone charm him. Charming is recommended. Give him

Robe of the Lost Circle,

Robe of the Whistling Fists. 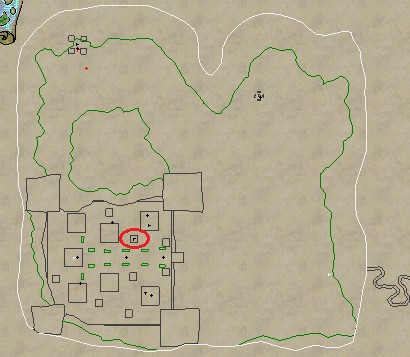 A. Go to Lavastorm Mountains and find any a fire sprite mob. Say “I challenge eejag” to spawn Eejag (Level 55 Iksar) at the bottom of the lava lake. He is easily soloable at level 65. Resists Magic Spells. He should not take more than 1 group at lower levels. Loot 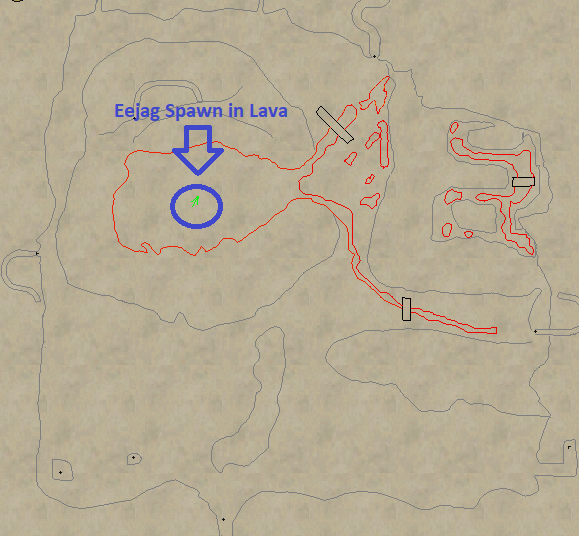 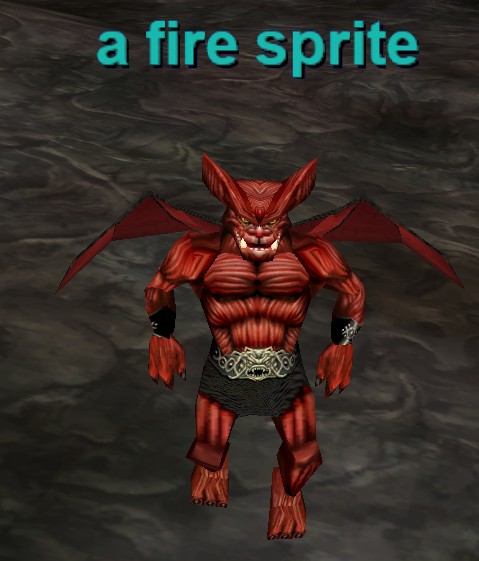 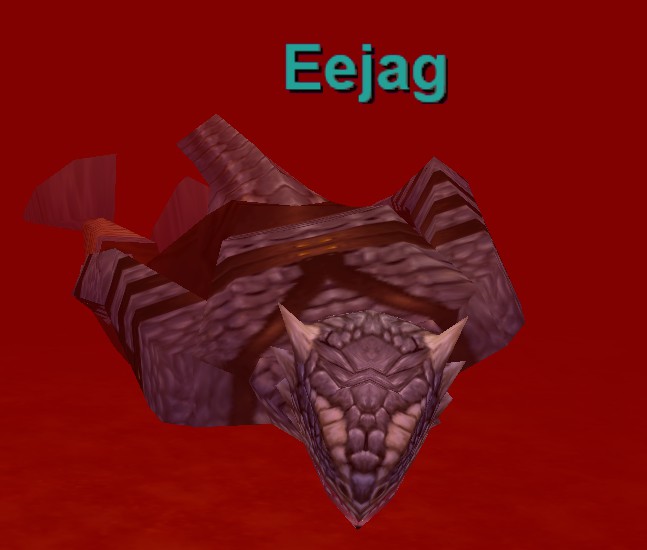 B. Go to Plane of Sky and find a presence (invisible). It is located on island 1.5 which needs Key of Swords to access. You can buy Key of Swords from the Key Master on Island 1.

– Give a presence your

Charred Scale to spawn Gwan. He has a knockback, so you will want to kill him inside the hut. This trivial fight should take 1 group or less. Other mobs on the island do not assist. Loot 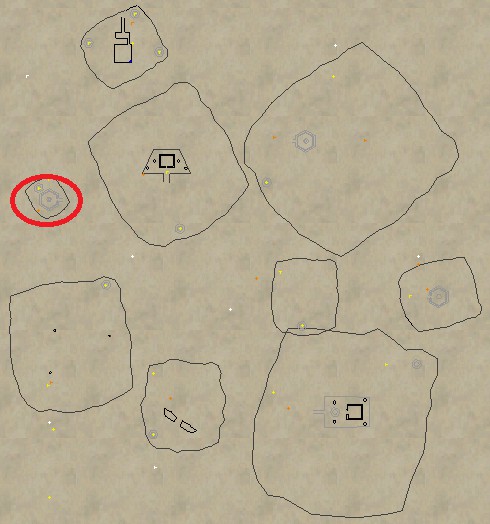 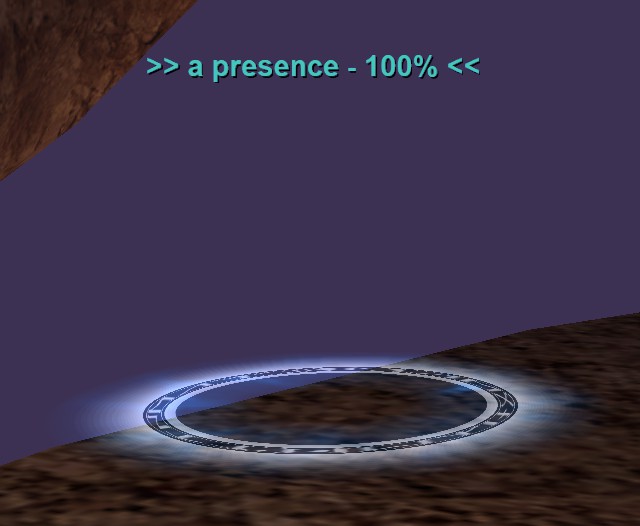 C. Go to Nurga and find a sleeping ogre. Give him

Breath of Gwan to spawn Trunt. Make sure a sleeping ogre cons indifferent when you turn it in (you can use sneak). This is a trivial fight and should take 1 group or less. Loot

D. Go to Overthere and find Astral Projection. Give him 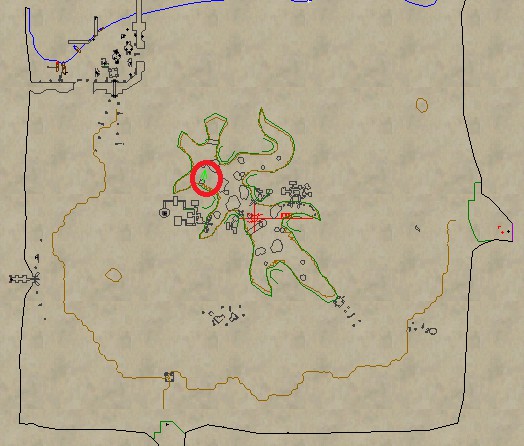 Eye of Kaiaren to spawn Vorash and Deep (KOS). Drag them to the shore (they will jump in the water and swim away at low HP if you kill them on the island). Once one of them dies Xenevorash will then spawn. Finish off the remaining mob then kill Xenevorash. Drag him to the shore also. He is level 65 and casts a stun on the tank. In PoP gear, you should be able to handle this with a just few players. It can take up to a couple of groups if you are in era. Loot 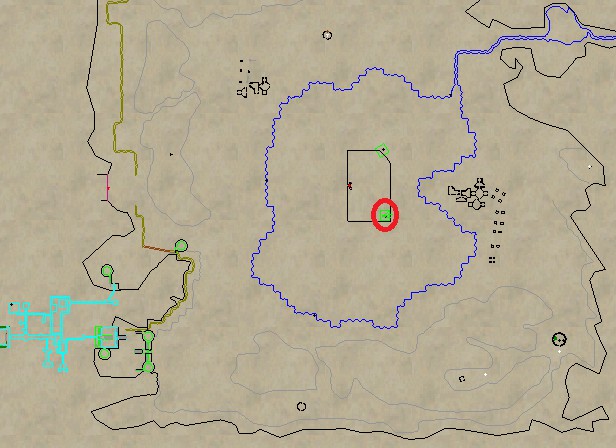 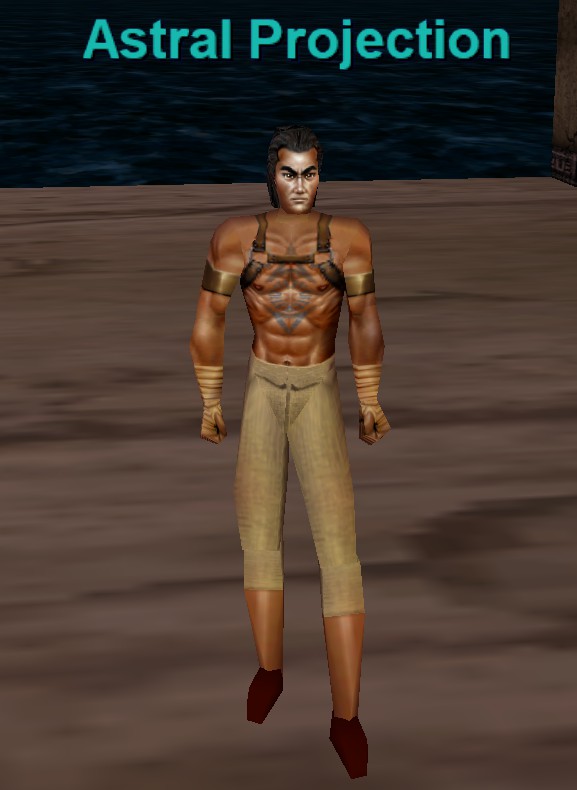 Go to Skyfire and kill named mobs until you get

Immortals. Having a tracker to hunt the named spawns down is helpful. All of the named are PH’s for the other ones. Usually only 2 or 3 are up at a time and they spawn all over the zone. Respawn is a few minutes or less.

Immortals is an uncommon drop off of any of them. This usually takes less than an hour with a tracker.

– Go to Erudin and find Tomekeeper Danl. He is on the second floor of the library. Give him 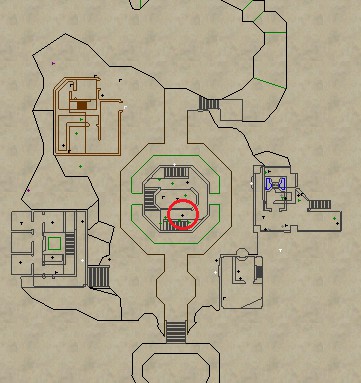 Robe of the Whistling Fists to receive

*Note: Only do this turn-in when you’re done using

Robe of the Whistling Fists or are ready to complete the Epic. Once you turn in the robe you can no longer use it’s clicky. 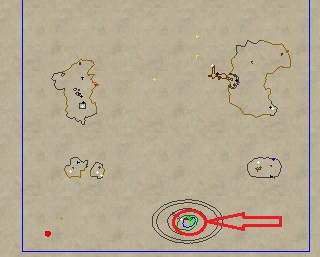 Head to Trakanon’s Teeth and find Kaiaren. There are two versions of Kaiaren, “crazy” and “sane”. You are first looking for the “crazy” version, who hangs out on the southeast side of the zone near Old Sebilis. You may need a tracker as sometimes he will get stuck in a wall or on a ceiling you can’t reach. 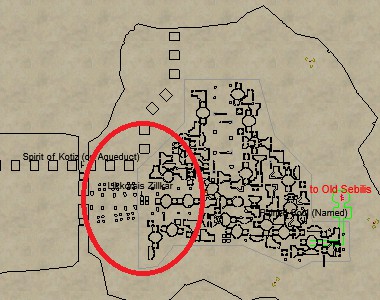 Celestial Fists (book graphic). He returns the book and attacks. Either kill him or run him off. I’d advise just running him off. The reason we turned in the book is that doing so spawns the “real” Kaiaren elsewhere in the zone. This is who you need to find next. 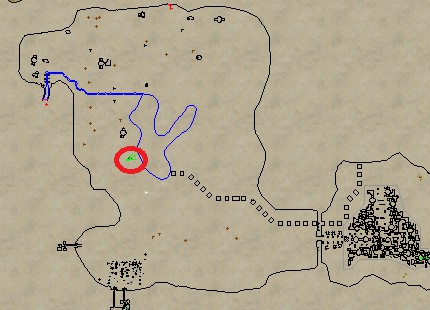 Warning: Read the next section fully before doing the turn-in to “real” Kaiaren. There are two books with very similar names, and if you do the turn-in’s in the wrong order, then you will not receive your epic. I have personally seen this happen to people.

Celestial Fists by itself. He will return a book to you called

Book of Celestial Fists. It has an identical graphic as

Celestial Fists, but a longer name.

Book of Celestial Fists along with 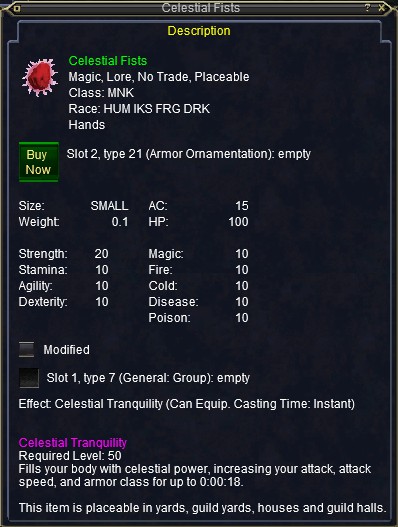 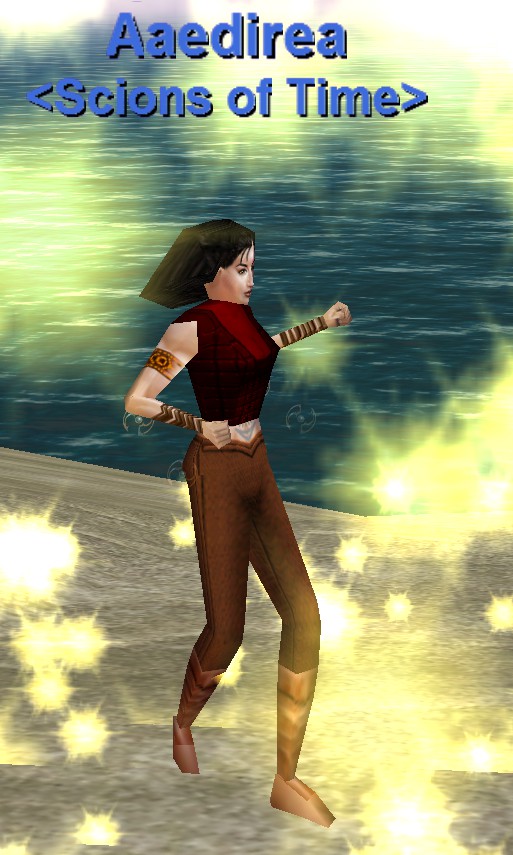