This guide covers Monk basics up to the Omens of War expansion.

Monks are a popular and top tier melee DPS class from Classic all the way to Omens of War. Not only do they have strong DPS, they scale well with buffs, are top tier pullers, and have high survivability with Feign Death and Mend.

Stats are more meaningful in early EQ because they don’t max out right away. Once you begin to get Luclin/PoP raid gear they are generally maxed by default from gear and/or buffs.

Generally, for DPS you want to prioritize Strength and Dexterity. Mix in AC and HP as needed. Monks can be pretty tanky in group content if geared. Once “Attack” becomes a mod, you’ll also want to get to the attack cap from gear, which  is 250.

If you are poor and are not wearing any weapons, Monks have a so-so damage table with no weapons equipped. It scales based on your H2H skill (level). They also get a really good weapon ratio from the Monk 1.0 Epic (The Epic goes in the glove slot, but boosts your unequipped H2H ratio). 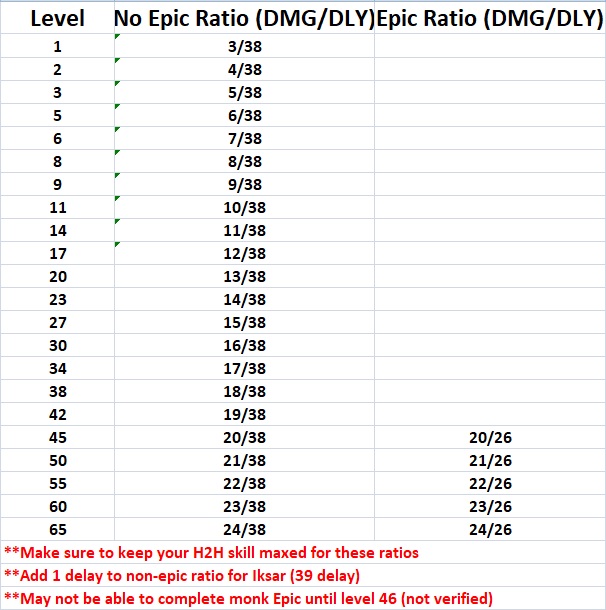 The Monk 1.0 Epic is best possible ratio until you start to run into the most exceptional Velious and Luclin Raid weapons, and even then it may be close.

Versus MotM (Mitigation of the Mighty) lower damage weapons tend to parse better. For example, Gharn’s Rock of Smashing 16/19 (Vulak drop) doesn’t have quite as good of a ratio as 60 Epic Fists 23/26, but it potentially could be better vs MotM. Gharn’s Rock also has great stats and a proc where the Epic Fist requires your weapon slot to be empty (so you’ll get no stats).

I haven’t gone into great parsing detail and this is a 101 basic guide. It is just something to keep in mind. It comes down to personal preference at a certain point. I’d prefer to use Gharn’s Rock for the stats and that it is just cooler/more fun in general.

Feign Death – Maxes out at 200 skill. Max this out ASAP. Higher the skill level the lower the chance to fail.

Mend – Allows you to recover HP 25% HP every 6 minutes. AA’s can cause it to critical heal for 50% HP. It can fail and can even do damage to you at lower skill levels. It maxes at 200, although from what I can remember it doesn’t fail once it’s at skill 100+. I recommend using Guild Master points to help level this up quickly. 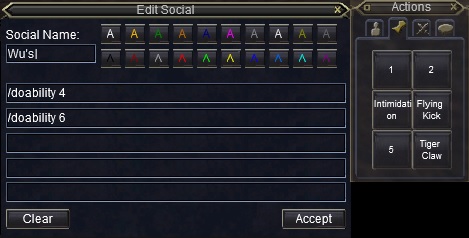 Usually you want to get Offensive or Utility AA’s first. Run Speed is also important. Get them in whatever order works best for your setup. Some of the best AA sorted by type are:

These become the most important stat you can get once they are available starting in Plane of Time. By this time your base stats will already be maxed out from gear. For DPS, priority should be: Heroic Dexterity -> Agility/Strength -> Stamina

Heroic Strength – You’ll get improvements to your max hit. 10 Heroic Strength = 1 max damage. It also provides a damage shield at the ratio of 1 Hstr to 1 Damage Shield.

Monks have a bunch of disciplines that don’t stack, and some really good ones that do. This guide only covers high priority ones.
Timers with the same “number” share a cooldown. Numbers in () is the level required to use the skill. For example, Fearless (40) requires player level 40.

Dreamwalk (66) – OoW
Increase run speed by 125% and resist all spells. 20 min cooldown. Lasts 3 ticks. Timer 5
**this replaces level 61 LDoN disc Planeswalk, which doesn’t have the spell immunity portion so is not as good.**

– Get Monk Epics ASAP. Both 1.0 and 2.0 are very strong
– Monks get dual wield at level 1
– 2-handers are generally not as good as 1-handers, especially vs MoTM.
– Load up on Cloudy Potions (invisibility).
– Get weight reduction bags ASAP. Monks take an AC penalty starting at 14 weight at level 1. This limit scales to 28 weight at level 70.
– Get Ninja Stars items for pulling. Ton Po’s Mystical Pouch from Rallos Zek in PoTime is one of the best monk pulling items in the game.
– Make use of the bandolier.
– Grab an Avatar proc weapon from Sleeper’s Tomb if you raid
– Get an instant cast clicky to mitigate mobs/bosses that cast dispel.
– Buy a store mount if you get increased stats from it.
– Keep Heal, Haste, and Spirit of Wolf potions handy.
– MoTM has less of a damage penalty on lower damage spells/attacks, which is great for monks as their attacks tend to be lower damage and but more frequent.
– Monk weapons are plentiful and strong in all expansions, especially if you raid.
– Monks scale well from buffs such as Shaman Avatar line, Bard Overhaste, Beastlord Ferocity, and Ranger attack buffs.