This guide covers Necromancer basics up to the Omens of War expansion.

Necromancers are extremely self sufficent and the best solo class in the game. They have a enormous variety of tools including strong DoTs, Feign Death, Mana pump, Lifetap, Pets, Root, Snare, mez (at lower levels), undead  damage/tools, Resurrect, and Summon corpse – just to name a few. With the Lich line of spells they regen mana extremely fast. They shine in solo play but can provide a great niche to groups as well with their different utility spells.  They can invis vs regular mobs and undead both. The biggest downside to Necromancers is often their DoT’s don’t damage fast enough to keep up with kill pace while in  a full group.

You’ll want to get as much  Mana / HP as possible. Intellect will be your primary stat which provides additional mana. HP/Stamina is a priority as well so you can take a few hits without dying instantly. HP also increases your solo efficiency due to Lich/Life Tap spells. Later in the game, you’ll also want to max out Mana Regen (aka Flowing Thought) from items (15 max by default). This cap can be raised in later expansions via AA.

Necros are squishy, however their Lifetap, Heal DoT Spells, and indirect benefit from HP, makes them the most tanky of all the cloth classes. Regen is also a good stat for the solo Necromancer to counteract the HP drain effect of Lich.

Focus Items become active in Luclin and Necromancers need a lot. They have different names depending on the era and specific item, but the description will tell you what they do. If you have two of the same type they will not stack; the highest one will be used. You’ll want to get the following:

– Spell Haste – Lowers cast time of spells. Great for getting damage out faster.
– Increased Detrimental Spell Duration – Extends duration of DoT’s and some CC spells
– Increased Damage on Duration Detrimental Spells % –  Increased damage on DoT’s
– Direct Damage Mod % – Important for Magic (Taps/DD), Poison (DD), and Disease Taps).
– Pet Focus Items – Increases Power/HP/damage of pets
– Mana Preservation – Lowers mana cost of spells by a %.
– Extended Cast Range – Allows you to cast from further away. Good for solo play.
– Extended Buff Duration – Good for general self buffs. Not as high priority as the ones listed above, but a great quality of life focus.

Heroic Stats provide a good boost once they are available in Plane of Time+. If you raid, your base stats will likely already be maxed out from gear and AA.

Your 3 main to focus on will be:
Heroic Stamina – Increases HP, mitigation, and stun resist.
Heroic Intellect – Mitigate spell damage (up to 35) and further increases your mana pool.
Heroic Agility – increases your evasion AC (not priority), but get it if you can.

The bread and butter of Necromancer damage. You get Magic (Magic Standard, Heal over Time, and Snare), Poison, Disease, and Fire DoT’s. Basically all necromancer DoT’s stack, even ones of the same spell resist school. The only exception I know of that doesn’t (in the 50-70 range) is Cessation of Cor and Dark Plague. Heal over Time/DoT type spells don’t either, but you can cast them on multiple mobs at once and receive the heal benefit from each mob the spell is cast on. 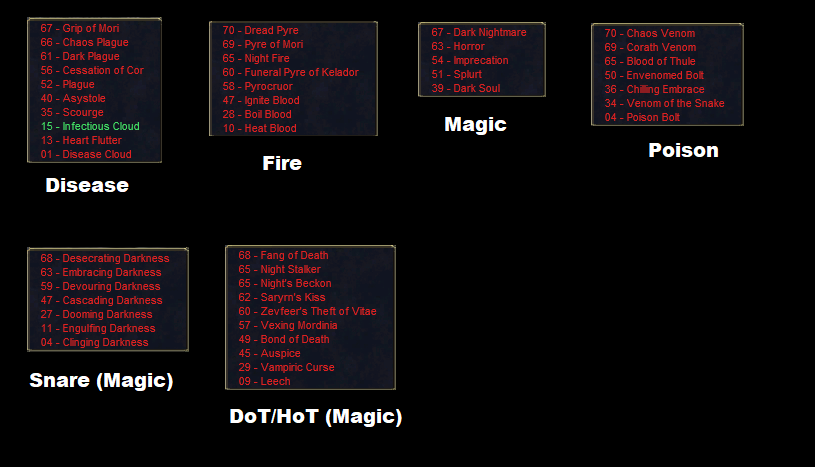 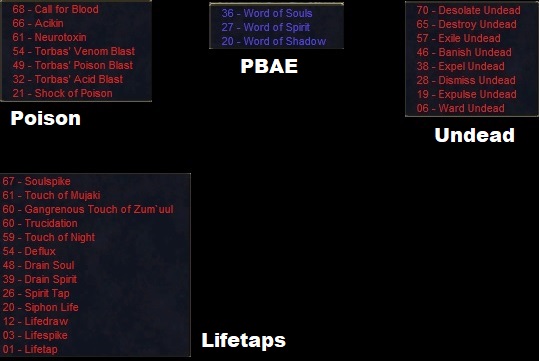 Necromancers get some pretty decent pets. They also get pet haste and pet heals to go along with them. 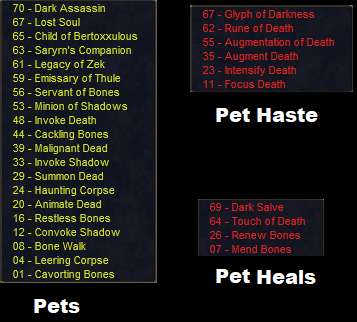 Necromancer’s typically don’t need Enchanter mana regen buffs. This is because the Lich line of spells give a huge amount of mana regen (they don’t stack). Lich spells will slowly drain your HP for Mana. 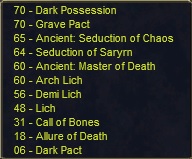 Necromancers get resist debuffs! These are underrated and should be used on raids when needed. Especially if you have multiple Necromancers or Mages/Wizards using fire spells. They stack with other resist debuffs.

Necromancers have the best undead control in the game. They can charm, mez, slow, and fear undead mobs. Don’t forget Necromancers also have undead nukes (see direct damage section above).

Fear kiting isn’t as popular as it used to be but pre-60 it is still a good way to solo. After level 60 many mobs (but not all) become immune to fear or are simply too high level in era to fear. It can be used as crowd control in certain situations as well.

Life Flow Spells are minor heal over time spells that Necromancers can use that will transfer Necromancer HP to other players. Combine these with Zevfeer’s Theft of Vitae (Level 60 Group DoT/HoT spell) and you can actually put out some decent Heal over Time healing in certain situations.

Necromancers can Feign Death. They can also summon and track corpses. 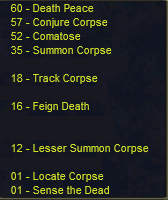 Shielding/Resist – These gives HP/AC/Resist
Invis and Invis vs undead buffs
Levant – Self-Only Evacuation spell at level 55
Runes – Necromancers get a solid rune line of spells PoP+
Dead Man Floating/ Dead Men Floating – Long lasting Levitate/See Invis/Enduring Breath/Poison Resist Buff.
Harmshield – Necromancers get 2 harmshield spells. One at level 20 and one at 58.
Sacrifice/Convergence – Necromancers can 93% res at level 53 for the cost of an Essence Emerald (requires player sacrifice to get an Essence Emerald).
Disease Cure – Necromancers can cure Disease.
Power Taps – Spell line that will melee debuff (attack, strength, etc) a mob. Some spells also give attack to the group

Necromancers best two options are Conjuration and Alteration. I like Alteration since it works on Lifetaps, poison DD’s, many utility spells, and most (but not all) of the DoT’s.

Some priority Necromancer AA are:

– DoT’s can generate a lot of aggro. Use Feign Death to clear aggro during your rotation if needed.

– Get a pre-nerf Circlet of Shadow. This item is an instant-cast self-only invis.

–  Get the item Holgresh Elder Beads – This summons an eye you can use for lifetaps and scouting. You can get one in the Shadowhaven Casino (once available). Otherwise it stops dropping at some point during Velious.

– Try to use all your tools possible that would be helpful in a group/raid. Necros have a lot of CC  and debuff options, especially early on. Consider charming undead mobs where possible, doing resist debuffs, CC’s, mana pump, and even life flow at lower levels.

– Necromancers shine vs. undead in both group and solo play.

– Necro 1.0 Epic is not very useful, but has good stats for a Kunark era item. Necro 2.0 Epic is really good as it increases your DoT chance to crit by 8%!

– Consider regeneration mod on items. This is good to counteract Lich HP drain.

– Get the item Orb of Tishan. This will allow you to proc tash (when no Enchanter is around) which is good for charmed pets.