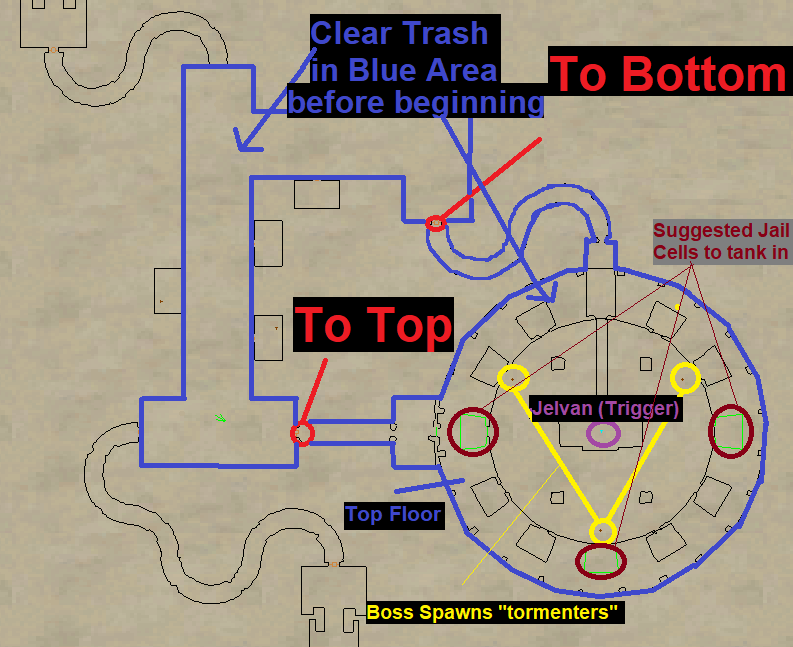 Before beginning, it is recommended to clear all the trash in the BLUE area on the map. This includes both inside the circular room and the outside hallways. This will allow you raid to run between from the bottom to the top level of the circular room during the event, if needed. You will need to clear the trash after the event is complete to get out anyway so you may as well clear it first to give flexibility.

To begin the event you’ll speak to Jelvan on the top floor. Say “help” to him to spawn 3x “tormentor” boss mobs on the bottom floor.

The goal is to keep HP % even on all 3x Tormentor mobs until they die (within 5%). They periodically cast AE’s throughout the event. The AE’s are based on NPC Hatelist so if you separate your raid into 3 groups and keep the mobs away from one another everyone will not get hit by every single AE, making the fight much more manageable. You can pull Tormentor’s into the jail cells to keep them separated. All Tormentor’s rampage, so have 3 rampage tanks ready to pull each one ASAP and drag them into a jail cell. Generally, the West, East, and South jail cells are recommended as tanking cells.

During the fight, as long as the mobs are balanced, once per minute Jelvan will cast the buff

Blessing of Jelvan (30% Melee mitigation, 5000 absorb) on each of the tanks (whoever has primary aggro on each Tormentor) to help mitigate damage.

If the Tormentors become unbalanced by greater than 5% HP, once a minute the Tormentor with the lowest HP will cast two nasty spells instead of the tanks receiving the

Blessing of Jelvan buff from Jelvan. There are emotes associated with the balance state:

The two unbalanced spells are:

Additionally, the mobs have different resist types so sort out your caster DPS accordingly. See more information below: 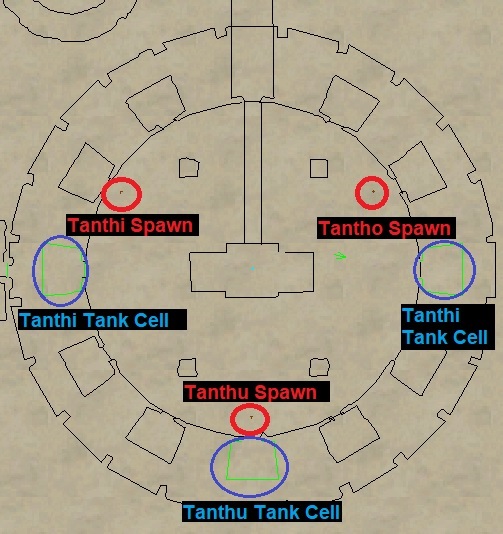 Any of the 3 can also cast the spells below if unbalanced: