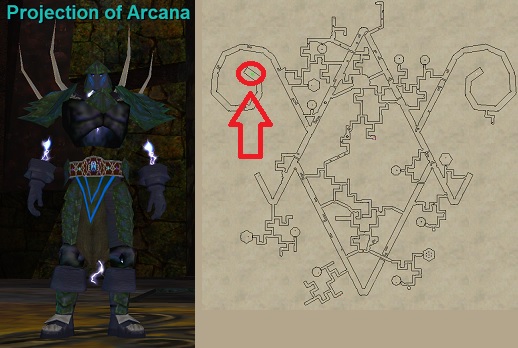 Speak to Projection of Arcana and say “efficiency” to get the instance. This is designed for 6 players in era.

Say “begin” to Master of Efficiency to start the event. The debuff Test of Efficiency will immediately go off when the event starts. It lasts 10 minutes and will recast again once it fades. It will be cast on every player in the group.

After a few seconds 4x mobs will spawn. You have 4 minutes to kill them (you’ll see a timer). They have 40K to 50K HP each and are fully slowable. They only hit for around 500-650 (35 Heroic Stamina). 2 of them (a muramite solider) are also mezzable and charmable. You’ll clear these same 4 mobs for 4 waves for a total of 16 mobs. If you clear a wave before 4 minutes is up you’ll still have to wait for the 4 minute timer to run out for the next wave to spawn.

Once the 4 waves are dead Enforcer of Efficiency will spawn. Kill him to win the trial.