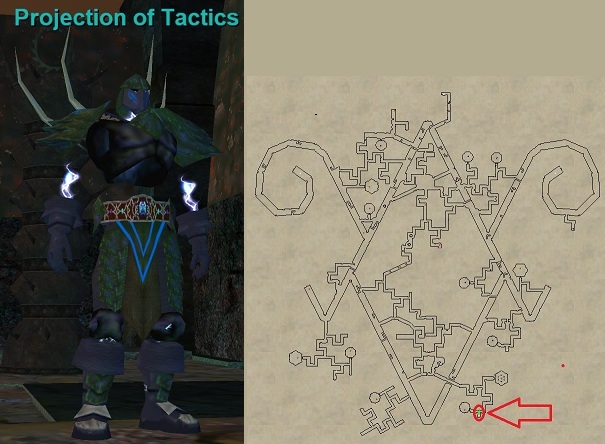 Speak to Projection of Tactics and say “subversion” to get the instance. This is designed for 6 players in era.

In this trial you’ll be disarming and unlocking trapped boxes. Each of these boxes needs to be disarmed by a certain class arch-type. Due to this it is recommended to bring at least 1 of each the following: 1 Disarm Trap Class (BRD ROG) / 1 Priest (CLR/DRU/SHM) / 1 Caster (ENC/MAG/NEC/WIZ).

Priests and Casters should have 2 spells before attempting the trial: their LDoN Disarm and Unlock trap spells (see details below). By the time Omens of War is out you may be able to buy these from your 26-50 Class Spell Vendor in the PoKnowledge library. If not, they are 60 points each from any LDoN Adventure Camp. They are level 33/34 spells.

Greater Scrying Stone from any LDoN Magus as they are used as reagents for the disarm trap spells that Priests and Casters use. These are

17.8pp each, I recommend buying a few stacks. They sell back at

Below are the specific spells/skills you’ll be using:

BRD/ROG:
Disarm Trap Skill
Pick Lock Skill (The skill, not the item you use on doors)

Once inside say “begin” to Master of Subversion to begin the trial.

As mentioned earlier, in this trial you’ll be disarming and unlocking boxes. They spawn around the edges of the room. There are 3 different types that will require a specific class to disarm and unlock it:

The chests all have consistent graphics so you can identify which one is which quickly.

Once a chest has been disarmed and unlocked you can type /open to open it and loot a coin. These coins give a different amount of points:

You can also just DPS the chest down if you have enough DPS – this is the way to go in later eras. They seem to have 30K HP, but generally disarming and unlocking is probably faster/more efficient in era.

If you open a trapped one while it is still trapped you’ll get hit with some AE’s. Mostly PBAE Direct Damage spells, one of them will also make your group drunk if they do not have an Alcohol Tolerance of at least 50.

Additionally, some unmezzable dragorn adds will spawn and run around the room occasionally. They should be avoided if possible, but can be killed off if needed. They have 40K HP and hit 500+.

Once you reach 300 points you can Hail the Master of Subversion in the middle. He will attack along with his 2x guards. The two guards are mezzable. Once dead, loot Shell of the Master for your reward.