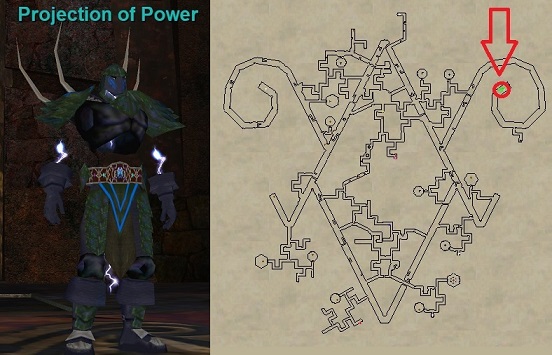 Speak to Projection of Power and say “corruption” to get the instance. This is designed for up to 54 players in era.

Upon zoning in you’ll see Huhn-Abram`s corpse in the middle of the room and 6x NPC’s around the room holding different 1.0 Epics. Say “fight” to one of the Epic NPC’s them to begin the event. Once the event starts the 6x Epic NPC’s will attack.

These NPC’s generally have the same characteristics as a PC player of that same class would have. For example, Wizards and Magicians cast nukes, Enchanters cast mez/charm/nukes/debuffs/stuns, melee do more melee damage than the casters, Rogues Backstab, Monks Feign Death, and Warriors will have the highest HP and call assist (details below), etc.

You’ll get 3 waves total, each with more mobs than the previous.

Yes there will be a lot of mobs on the 3rd wave! Classes you’ll encounter are: Warrior, Wizard, Enchanter, Magician, Rogue, Monk, Necromancer, Cleric.

This fight is kind of chaotic but generally kill off easy targets first. For example, casters are most vulnerable to melee since they have silk armor and lower HP. Have your tanks and light tanks pick the mobs up as fast as possible and ensure people have high spell resists. Have tanks pick up the tank/melee mobs ASAP since they hit harder.  If you need to pause and med between waves you can keep 1 NPC alive until you are ready to start the next. The waves often run up from the zone in area when spawning.

Kill all 36x mobs to complete the event. 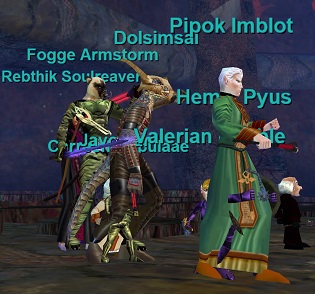