Paladin BiS can be subjective. You’ll want to gear what’s best for your play style. The goal of this guide is to be a highly effective tank with minimal downtime while providing effective group support.

Offensive focuses and stats will be a lower priority in this guide, but if you want to pick up items that are considered more offensive then go for it. For example, you could swap out some HP augments for LDoN Heroic Dexterity augments.

Improved Dodge III: Loop of Entropic Hues – Ear
Parry/Block III: Forlorn Mantle of Shadows – Shoulders
Stack the strongest available AC and HP Augments. Heroic Dexterity where it can be fit in. Swap as you please.

**Note: Your HP/Mana/AC may be a off depending on which clickies you have from PoP and GoD. For example, you will have an additional 400 Mana Pool if you have the Eye of Dreams clicky from PoTime (this profile has it) . There are some from both PoP and GoD you’ll want to get.

Also this profile is from a live server, I compensated for the stat difference on a TLP Gates Server, but HP/Mana/AC totals may be still be slightly off.

A Paladin Clicky Item Guide can be found >> HERE << 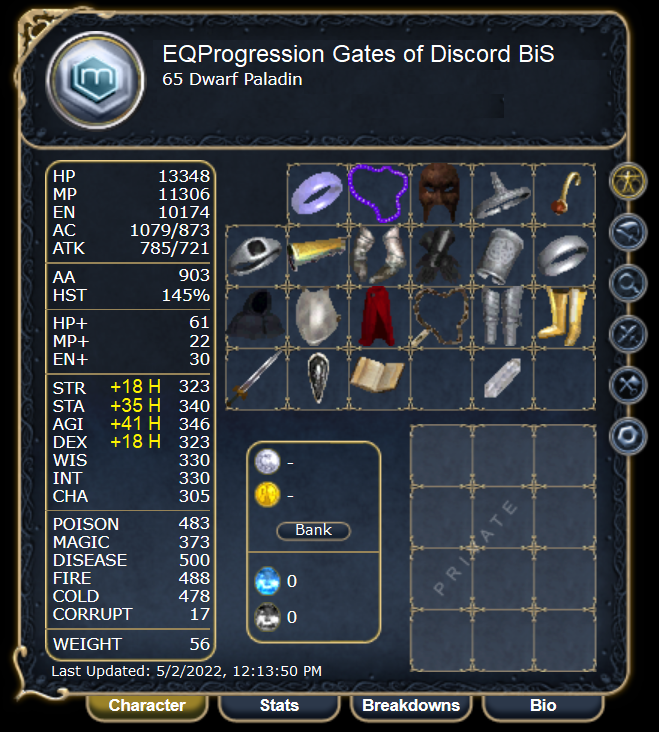