This guide covers Wizard basics up to the Omens of War expansion.

Wizards are the primary spell casting damage dealing class.  They have a enormous palette of damage spells for the Cold, Magic, and Fire schools. Their spells are generally extremely mana efficient when compared to other caster classes. They also get snare, root, and portals. They shine in group play with a tank that has good aggro but are able solo as well when a group can’t be found.  They can invis vs regular mobs and undead both. The two biggest downsides to Wizards is their high med/recovery time and being squishy.

You’ll want to get as much  Mana as possible. Intellect will be your primary stat which provides additional mana. Later in the game, you’ll also want to max out Mana Regen (aka Flowing Thought) from items (15 max by default). This cap can be raised in later expansions via AA. HP/Stamina is second priority so you can take a few hits without dying instantly. However Wizards are very squishy and aren’t meant to be taking hits in general.

Focus Items become active in Luclin and Wizards will need a few different ones. They have different names depending on the era and specific item, but the description will tell you what they do. If you have two of the same type they will not stack; the highest one will be used. You’ll want to get the following:

– Spell Haste – Lowers cast time of spells. Great for getting damage out faster.
– Direct Damage Mod % – Important for all schools of magic (Cold, Magic, and Fire).
– Mana Preservation – Lowers mana cost of spells by a %.
– Extended Cast Range – Allows you to cast from further away. Good for solo play.
– Extended Buff Duration – Good for general self buffs. Not as high priority as the ones listed above, but a great quality of life focus.

Heroic Stats provide a good boost once they are available in Plane of Time+. If you raid, your base stats will likely already be maxed out from gear and AA. Heroic Stamina and Agility increase your survivability. Heroic Intellect helps mitigate spell damage and further increases your mana pool.

Heroic Agility – Avoidance – Wizards will gain avoidance AC from this.

Wizards get a huge amount of damage spells with varying cast times, mana cost, resist checks, and damage schools (Cold, Magic, Fire). They also get different types of AE spells. What you use will vary widely based on what content in the game you are doing.

Spell types include:
– Single Target
– PBAE – Hits all targets around Wizard
– Targeted AE – 4 Targets Max (used in quad kiting).
– Rain (Targeted AE)– Does 3-4 Waves of damage. Max 4 targets.  On a single target it will do 3 waves. If more than 1 target in range it will do a 4th wave. These are great in both single target a small pack situations as they can do a lot of damage for low mana cost if they crit.  Rains are most effective against mobs that are being tanked in place. Some rains are on separate timers from each other so you can cast weave some of these together. Careful though, you can hit yourself with these! Very good on TLP’s!
– Lures (Cold/Magic/Cold) – These have -300 resist check so are good on highly resistant mobs.
– Stuns – Stun mobs!

*During Velious they also get “Bane” spells that can be used against Velious Dragon’s or Giants. These are unresistable. 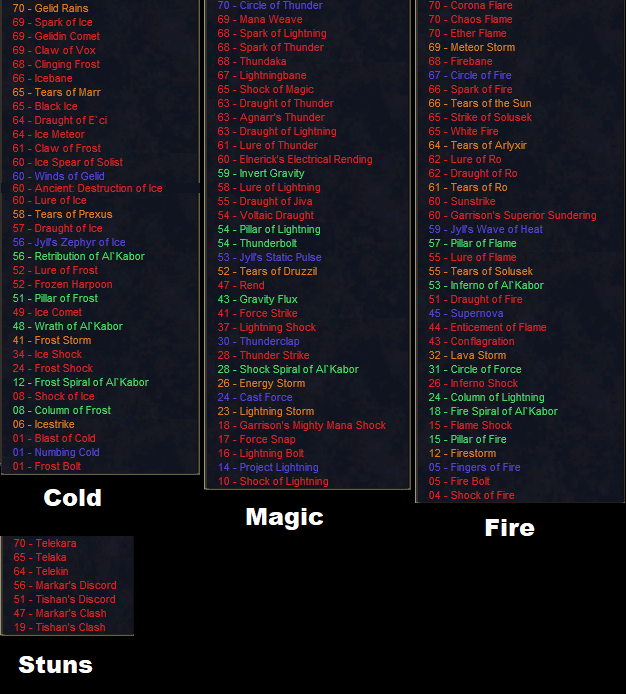 Wizards get a nice selection of Root spells with different cast times, durations, and spell resist checks. They can also AE snare.

Wizards can port all across the game. They have 3 main types: Self (Gate), Group (Portal), and Target (Translocate). Additionally, they have porting tools like Evacuations (Self, group, and target), and port to bind (self, target, group, or PBAE). They can also port to Plane of Hate/Sky. 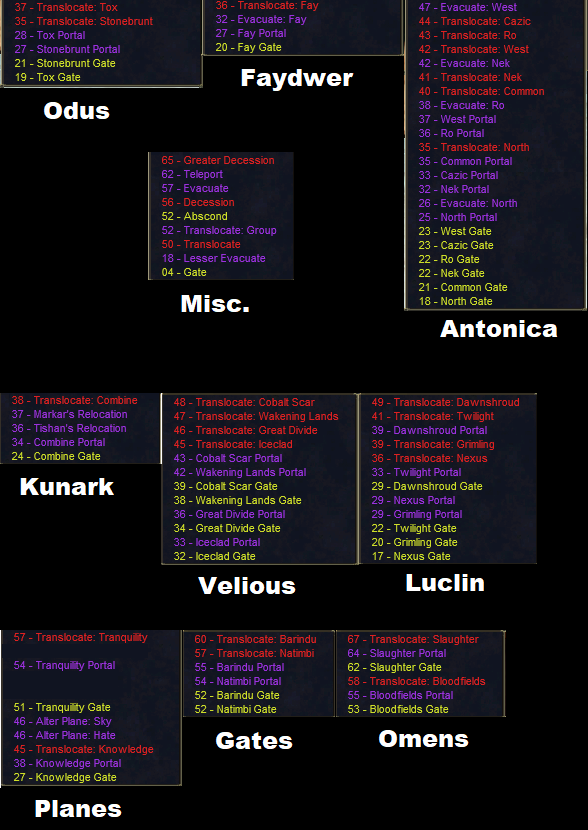 Wizards get familiars. They are not actual combat pets but are essentially a buff that will give you increased mana pool, mana regen, resists, damage, crit chance, and lowered fizzle rate. They start off weak and give more abilities as you get higher ranks. These spells eventually get replaced with “Improved Familiar” AA.

Concussion Spells are aggro reducing spells. Wizard nukes generate large amounts of threat so you’ll want to weave these in so you don’t pull aggro. These spells are especially important on raids or when your tank has low threat generation. In Planes of Power you’ll get a clicky Concussion from the Elemental Pants. These are a must have.

The Harvest spell grants a small amount of mana back every 10 minutes (up to 500 roughly).  It is a level 32 spell. It also stuns you for 10 seconds but this stun can be resisted with Heroic Stamina. There is also the AA Harvest of Druzzil which can be used as well and does not share a cooldown with the spell. The AA version does not stun you either!

Shielding/Resist – These gives HP/AC/Elemental Resist self buffs.
Invis, Invis vs undead, and Levitate buffs
Runes – Wizards can cast runes on themselves that provide small amounts of Mana Regen. Epic 1.0 and Force Shield are examples.

Wizards should always go Evocation as their damage spells all use this casting type.

Some priority Wizard AA are:

Frenzied Devastation (GoD+) – Cooldown based AA to increase crit chance for limited time/charges at the cost of additional mana.

– If possible, ask Enchanters to cast Glamorous Visage on you during raids to reduce your aggro on boss fights (10% less aggro).

– Having a Necromancer in your group for Mind Wrack is great for sustaining mana during raids.

–  Wizard 1.0 Epic is fairly easy, but is mostly used as a stat stick. The clicky rune is decent for a little while, but has a long cast time.

– Wizards biggest bottlenecks on raids are resists and aggro. Manage your aggro and you’ll do great. Hopefully your raid keeps resists debuffs up because Wizards can be frustrating when mobs aren’t resist debuffed.

– Do the Staff of Temperate Flux quest. It is an instant cast item that can be used from you inventory to debuff enemies for -5 fire/cold. Since it’s instant cast it’s also great for pulling. **You can also upgrade this to the Staff of Elemental Flux (-12 Fire/Cold), Gates of Discord+? — not confirmed what expansion this becomes available**

– Get Maelin’s Leggings of Lore from Elemental Planes and/or P3 Time – for the Concussion clicky.