Guise of the Coercer
Quest Guide 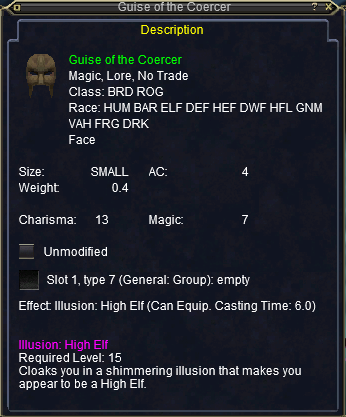 You will need to have a Rogue complete Rogue 1.0 Epic up to the point where they get

You will also need to kill  Stanos Herkanor and loot

Head of Stanos. It’s best to have others kill him so your rogue does not lose faction. Depending on the era it might take a few players or up to a group or two to kill him. He summons all the mobs in the cave area when he is attacked (similar to how Cazic-Thule summons Plane of Fear trash upon aggro).

Head of Stanos head to Kithicor Forest. Give

Head of Stanos to receive Guise of the Coercer. General V`ghera will despawn upon turn-in so only one person can do it at a time.