This guide covers Magician basics up to the Omens of War expansion.

Magicians are the  primary pet class in the game.  While the pets are weak in some expansions, they are very good from Classic – Luclin. Often used as main tanks for groups. They drop off a bit in Planes of Power (by drop off i mean not incredibly OP) and start getting better again at level 71-76+, however this guide only covers up to Omens of War.

Magicians have a good array of Magic and Fire nukes to choose from. and have a ton of spells in general (too many to go over in a 101 guide). They have some unique utility such as Call of the Hero, Damage Shields, Mod Rods, resist debuffs, and summoned items. We’ll go into some of the more important ones further below. They are best in group play but can solo during the expansions that their pets are strong.  Some downsides to Magicians is their high med/recovery time, low CC, and being squishy.

You’ll want to get as much  Mana as possible. Intellect will be your primary stat which provides additional mana. Later in the game, you’ll also want to max out Mana Regen (aka Flowing Thought) from items (15 max by default). This cap can be raised in later expansions via AA. HP/Stamina is second priority so you can take a few hits without dying instantly. However Magicians are very squishy and aren’t meant to be taking hits in general.

Focus Items become active in Luclin and Magicians will need a few different ones. They have different names depending on the era and specific item, but the description will tell you what they do. If you have two of the same type they will not stack; the highest one will be used. These are actually easy for Magicians to obtain because they can summon TEMPORARY items that have these effects! Although its recommended to get an actual focus item once you can. You’ll want to get the following:

– Pet Focus Items – Full Guide HERE.
– Spell Haste – Lowers cast time of spells. Great for getting damage out faster and summoning pets.
– Direct Damage Mod % – Important for both schools of magic (Magic and Fire).
– Mana Preservation – Lowers mana cost of spells by a %.
– Extended Cast Range – Allows you to cast from further away. Good for solo play.
– Extended Buff Duration – Good for general self buffs. Not as high priority as the ones listed above, but a great quality of life focus.

Heroic Stats provide a good boost once they are available in Plane of Time+. If you raid, your base stats will likely already be maxed out from gear and AA. Heroic Stamina and Agility increase your survivability. Heroic Intellect helps mitigate spell damage and further increases your mana pool.

Heroic Agility – Avoidance – Magician will gain avoidance AC from this.

Magicians get a fair amount of Fire and Magic damage spells with varying cast times and mana cost. Most of the Magician damage spells have 0 resist check, however they have resist debuffs (malo line) to counteract this. While not as robust or mana efficient as the Wizard spell library, they still have the second most options of any class. They also get different types of AE spells. What you use will vary based on what content in the game you are doing.

Spell types include:
– Single Target
– PBAE – Hits all targets around Magician
– Targeted AE – 4 Targets Max
– Rain (Targeted AE)– Does 3-4 Waves of damage. Max 4 targets.  On a single target it will do 3 waves. If more than 1 target in range it will do a 4th wave. These are great in both single target a small pack situations as they can do a lot of damage for low mana cost if they crit.  Rains are most effective against mobs that are being tanked in place. Some rains are on separate timers from each other so you can cast weave some of these together. Careful though, you can hit yourself with these! Very good on TLP’s! 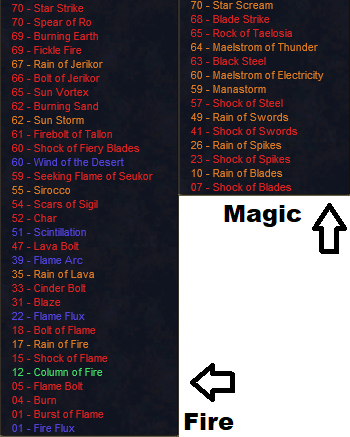 Magicians get a really nice line of resist debuffs. These are good for solo, group, and raid scenarios. It is one of the main jobs of a Mage (or Shaman) on a raid to ensure mobs are debuffed. The level 60 one, Mala, is unresistable.

Once in Plane of Time, you’ll want to get Veil of Lost Hopes from Saryrn. It has a clicky Malosinia on it, a must have.

Magicians (and Druids) both get a good line of Damage Shield spells. Keep these up on tanks and your pet for extra damage.

Magicians have 4 main types of pets they can summon. Earth, Fire, Air, and Water.

Generally, Earth has the most HP, Fire is a spell caster (51+) and has a self damage shield, Air can proc stuns, and Water has the second most HP and also Backstabs. Magicians have some other various pet summon spells, but we won’t cover those in this guide as they are less used. You’ll want to also get focus items to increase the power of your pets.

The Magician 1.0 Epic is by far the most powerful pet in the game prior to Planes of Power pets. You’ll want to get this as early as possible when Kunark is released.

Magicians can summon pet weapons and gear for themselves and other players. Magicians often sell these to others to make a little extra platinum. Some example items are haste (item haste) masks, HP Belts, HP/proc weapons. Players can use *some* of these items, but not all. Although it isn’t recommended or widely used by players in most situations. The spell book is pretty messy for Magicians so some of the items in the list below are player consumables (like arrows and ninja stars) while others are pet only.

Magicians also can summon some basic gear to equip pets with. Pets can be equipped with some regular player gear as well  to increase their stats. Although the items will be lost once given so be careful what you choose. 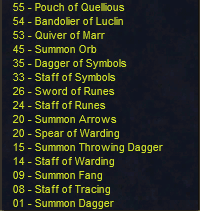 Magicians can also haste and heal their pet. The haste spells are very good. Always keep your pet hasted! The heals are so-so, but worth getting. 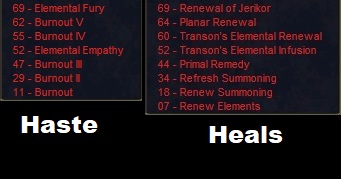 As mentioned earlier, Magicians can summon focus items. Improved Damage, Improved Ranged, etc. These are tradable and great when undergeared, but should not be used as a permanent solution.

Call of the Hero – Summons target player to your location. Requires a pearl.

“Mod Rod” – Gives target a 3 charge item that allows them to convert HP to life. These are useful for any class that uses mana. 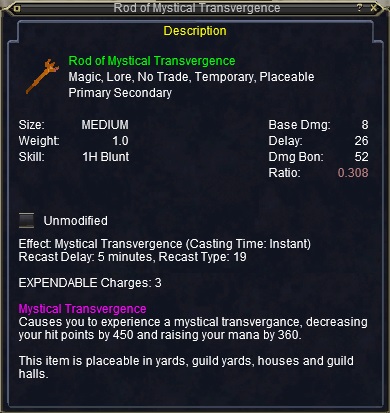 Once in Planes of Power, you’ll want to pick up the elemental legs Magi`Kot’s Pants of Convergence. These have a clicky mod rod on them. It is a must have.

– Shield/Resist Buffs – These gives HP/AC/Elemental Resist self buffs.
– Invis, Invis vs undead, and Levitate buffs
– Magicians can summon all kinds of items. Levitate Rings, Bags, Food, Water, Eyeballs (for scouting), Misc. items for quests, etc.
– Magicians get a mana regen line of buffs as well. It starts at level 58.

Some priority Magician AA are:

– Keep your group/raid up with mod rods.
– Be proactive with resist debuffs and you’ll be loved by all
– Always keep Damage Shield up on the tank
– MoTM increases your aggro from pets, so be careful with aggro on MoTM mobs
– Make life fun and get 1.0 Epic ASAP.