You need to have completed the BiC Quest #2: Barindu to begin this quest. 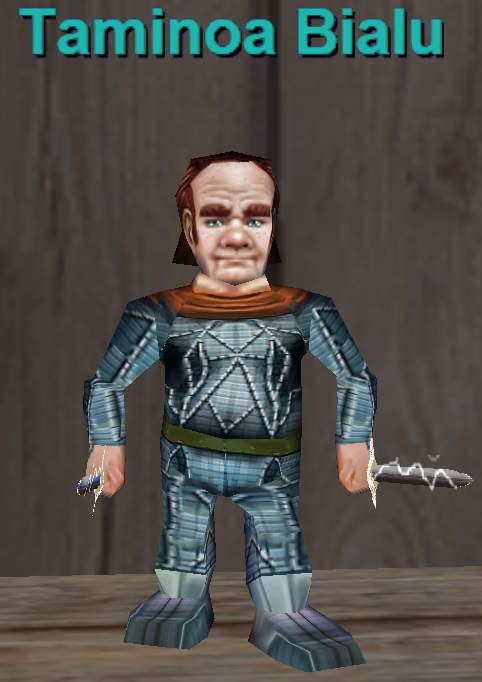 Go to Riwwi and kill trash mobs and loot item:

You’ll need to gain faction with Yunjo Slave Resistance. This can be an annoying hurdle and takes some time to explain. Don’t get discouraged!

You can /claim the item below to increase your faction by +700. This won’t get you to Warmly (which you need), but it does get you to Amiably, so it is a substantial boost. **Note: May be on the Daybreak store in era per feedback I received** 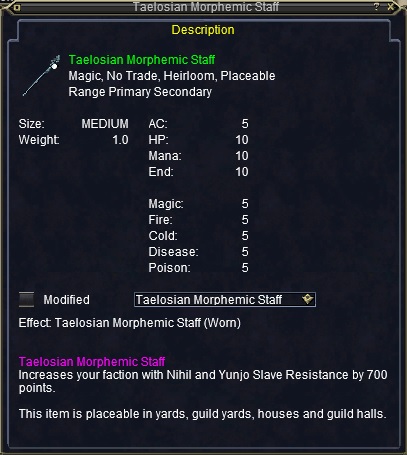 The fastest way to get this faction is by doing a side quest. The NPC’s for the turn-in are all in Riwwi. The 5 NPC’s all want a different types of food or drink that are crafted from tradeskills (either baking or brewing – the easy ones). Trivial for most of the items are only in the 100-200 range.

You can pick one or do any variation that you wish. I personally went with a thirsting Yunjo (NPC), and made him Taelosian White Tea so we’ll go over the details of that.

You can choose a variation of any of these. Each of the named have a PH an enslaved yunjo. They can also be PH’s for each other.

a thirsting Yunjo – give him a “taelosian tea” type drink item. An example of this would be Taelosian White Tea

a starved Yunjo – give him a “taelosian cragbeast meat” type food item. An example of this would be Spiced Cragbeast Meat.

an emaciated Yunjo – give him a “taelosian crab meat” type food item. An example of this would be Saltwater Crab Meat.

a famished Yunjo – give him a “taelosian tuna” type food item. An example of this would be Tuna Meat.

a hungry Yunjo – give him a “taelosian hynid meat” type food item. An example of this would be Spiced Hynid Meat.

1) You may be able to just use the base/food drink as long as it is edible, for example for the 1 lb. Saltwater Crab can potentially be used.

2) Having a wide variety of food/drink so you can use every NPC helps a lot to speed the factioning process up. However if you have to spend a lot of time farming the mats then it may not be worth effort, but it is something to consider case-by-case. Keep in mind tehse items are tradable you check your Guild/Bazaar**

Each turn-in will give a small amount of Yunjo Slave Resistance faction. When doing the turn-ins consider if you want to use 2x faction potion from the Daybreak Store if it is available on your server.

How it works (What I did)

12x Taelosian Tea Leaves off various Gates of Discord trash mobs. Then I went to Abysmal Sea and gave them to  Yitimis Groglenog (see map below). I received

24x Tealosian Tea in return. She gives 2x of these for every

Taelosian Tea Leaves you give her.

Note: You can also create these yourself with Brewing if you have the GoD Tradeskill quest done for Brewing (maybe not needed anymore?), but I just used the NPC.


Then using a Brewing Barrel I combined them with a

Taelosian White Tea. You get 5 per combine so I ended up with

You may want to farm more than 12 leaves to ensure you have enough to get to Warmly. Do the math for what you need. 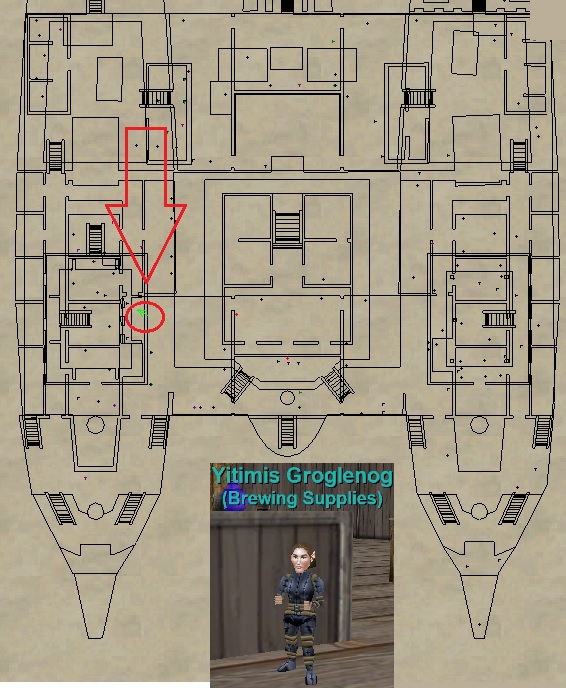 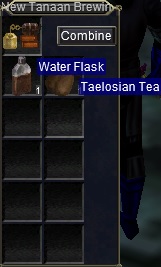 At this point I went over to Riwwi and looked for a thirsting Yunjo using tracking. It is not always up; it has a spawn cycle with the other 4 Yunjo named, and they all also share a generic PH with an enslaved yunjo.

Taelosian White Tea stack to 20. I turned in the entire stack to a thirsting Yunjo. He only took 8, and gave back the remaining 12, then despawned. Each of the

Taelosian White Tea gave 5 faction each, for a total of 40 faction.

I also turned in a stack of

Saltwater Crab Meat that I had sitting in the bank to an emaciated Yunjo. He took 8 and gave back the rest of the stack. I received 2x faction per turn-in, for 16 faction total.

At this point I just sat around for several hours and did turn-ins when I saw the appropriate mob spawn on tracking again, and did this unill I got to Warmly faction. Sometimes named would repop instantly in the same spot, other times it would be a PH so I just sat around an waited. Respawns can take somewhere between 20-30 minutes (estimate). They always spawn in one of the 4 structures in the map below. Sometimes I’d kill PH’s with an alt (you’ll lose faction if you do this, although you can pull it with a non damaging ability/spell and kill with DS to avoid this loss) to see if it had any impact on respawn times but it didn’t seem to make a difference. 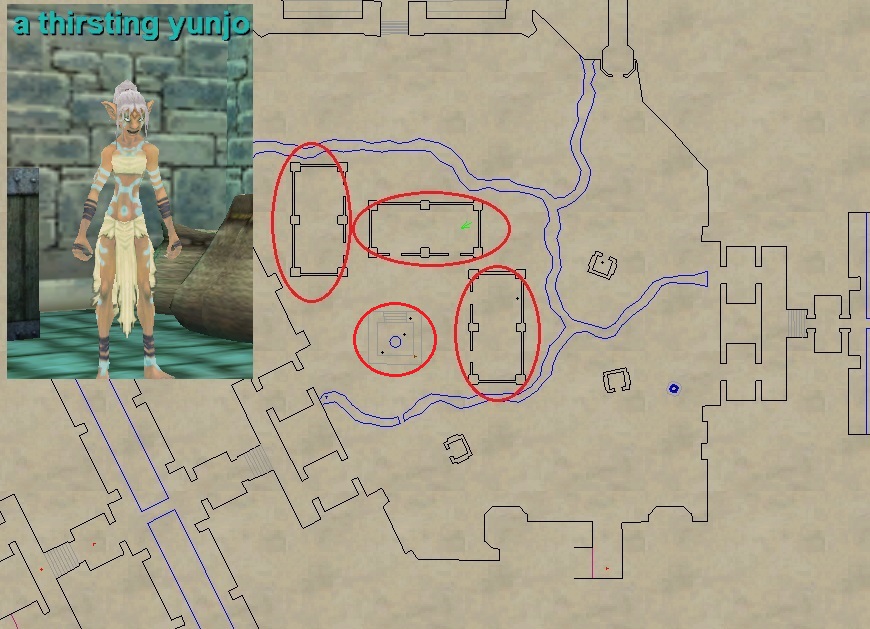 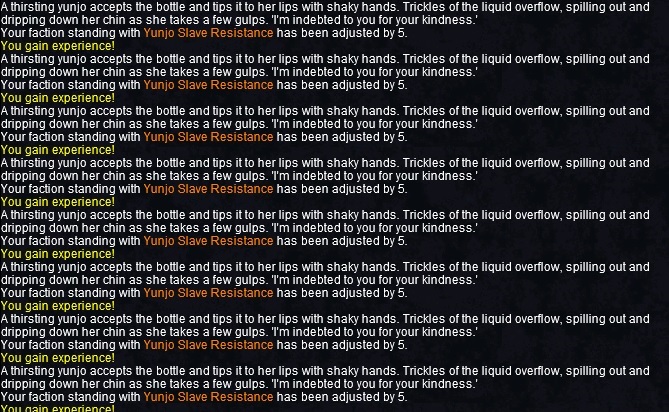 Hail her and say “favor” to receive: 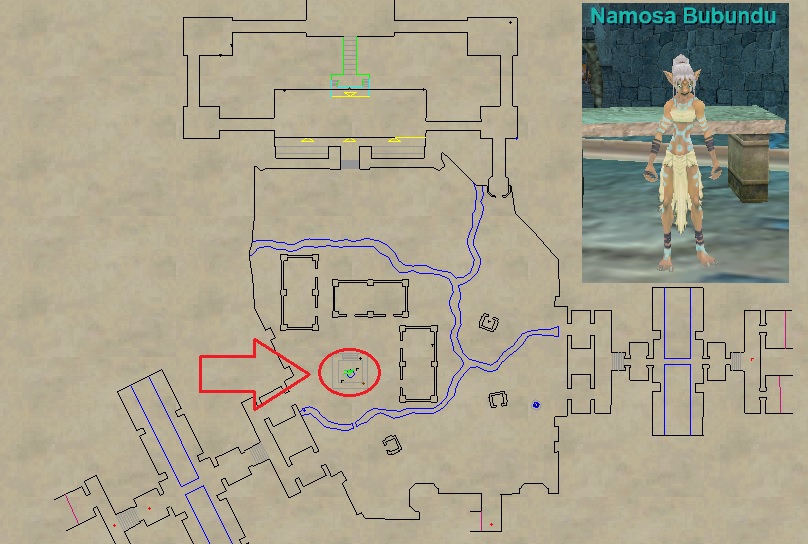 Go back to Abysmal Sea and locate Pandula Bubundu. She’s on the ship-deck. Give her 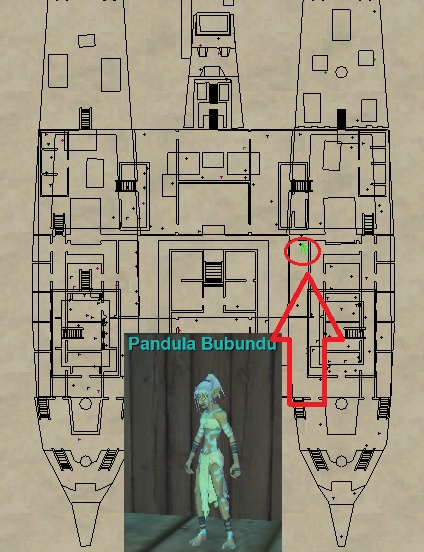 Token of Understanding to receive 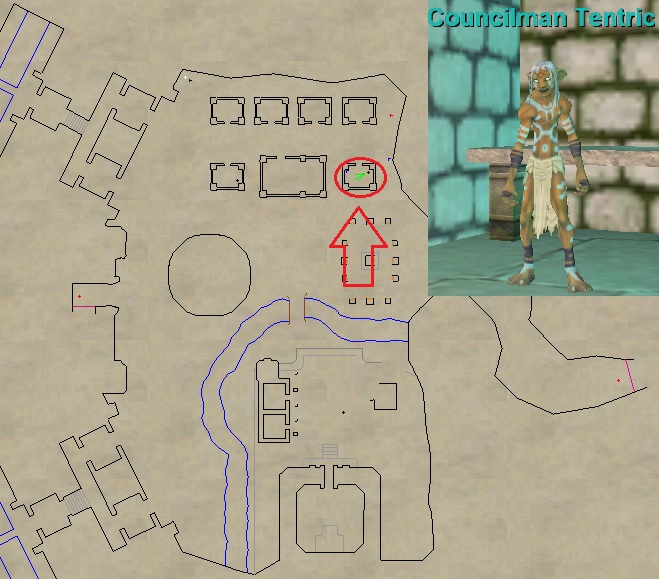 Go back to Abysmal Sea and locate Pandula Bubundu. Give her

Symbol of Faith to receive

Crescent Stone Amulet. You will get a Character Flag as well.

While still in Riwwi, head over to Turlini. Say “set you free” to receive 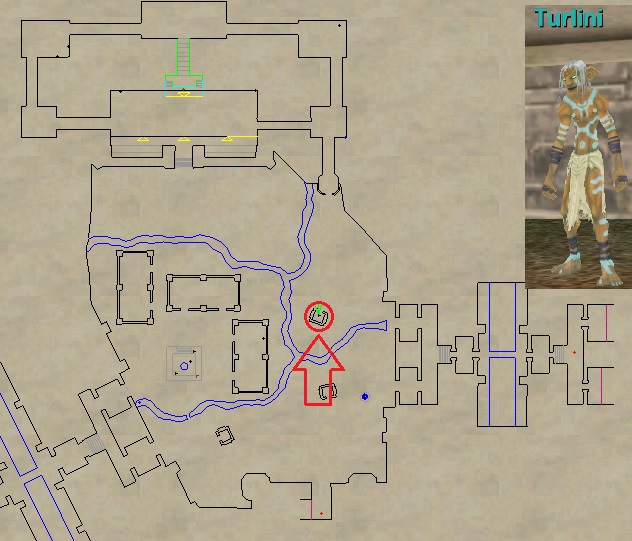 Now we need to fill the key bag up. You’ll need to get 10 keys. They can be done in any order. See chart below for details:

Once you have all 10 keys combine them in 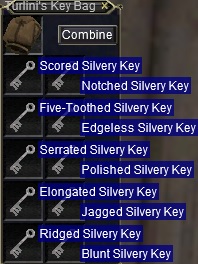 Head over to Riwwi if you aren’t there already and locate Turlini. Give him

Sack of Silvery Keys. You’ll receive an emote, a flag, and some faction.

1) While still in Riwwi, head down to the arena area (see map). Say “i have come to defy the muramites” to ANY of the an enslaved yunjo. You will receive

Satchel of the First Battle.

This will also spawn the boss Frothing Hynid. He is easy. Kill him and loot

Frothing Hynid’s Head into the

Satchel of the First Battle, hit combine to create

3) Run back over to Turlini nearby, give him

Yunjo’s Braided Cord can then be given to any an enslaved yunjo in the arena once again to start event #2. You’ll rinse and repeat this task for all 10 events.

1) Give the item that you got from Turlini on previous event to any an enslaved yunjo to receive  a new “empty slot container” type bag + spawn the bosses. **The only exception here is when you are starting the 1st event, where you’ll need to say “i have come to defy the muramites” to any an enslaved yunjo to start the first event.
2) Kill the bosses
3) Loot heads and  from bosses and combine into the bag to create a combined bag
4) Give the combined bag back to Turlini to receive the item that starts the next event.
5) Repeat for all 10 events.
6) Watch Video of the events >> HERE << 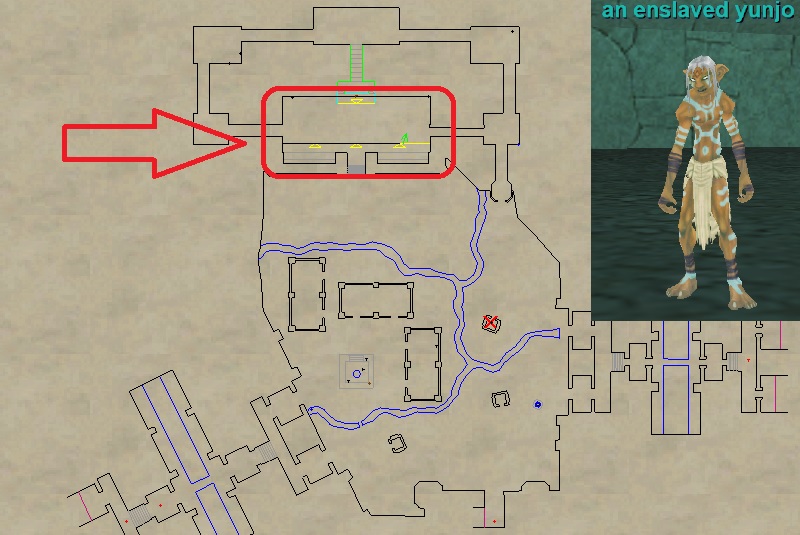 After the 10th event is complete and you do your turn-in to Turlini he will give you:

Sash of the Yunjo’s Champion and

2) Make the final combine in your in your