1) Zone into Thundercrest Isles via The Broodlands. You can use your compass to find the zone in portal.

2) To complete this event you’ll need to kill Yar`Lir. Do not approach her chamber until you are ready to engage. She has a big aggro radius but is perma-rooted. The door to her chamber locks at 95% HP. 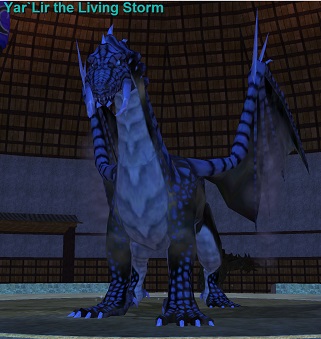 This is a DPS check burn fight. Kill her ASAP. She has a knockback so everyone should have levitate to avoid getting knocked around the room. Everyone should stack up on top of her to DPS but face her away from the raid when tanking to avoid her directional AE. Have AE heals ready for her high damaging AE’s.

She changes forms and will do different abilities if your DPS is too low. The easiest win is is to burn her down before she’s able to change forms. She may start changing forms at 3 min 30 seconds into the fight (see more info below).

Below are her forms in addition to her normal abilities if she changes forms before you’re able to kill her. Listed also are the duration of each phase at which she changed forms (for me).

5 – Yar`Lir the Living Storm
– Base form

Yar`Lir’s Fang from her corpse for Tier 4 progression. A chest drops in the middle of the room with additional loot. **