Aid Grimel Quest Guide
Signet of the Arcane
+
Signet of Might

The Aid Grimel Quest is a 7 Part PoP tradeskill quest that gives you a choice of two earrings once completed.

Click on the links for a guide to each section:

The Quest starts in at the top of the elevator in Plane of Knowledge. The NPC is named Aid Grimel. To start Quest #2 you’ll need to have first completed Quest #1 and have an unmodded skill of 220 in Brewing. You’ll also need the appropriate Planar flags (Full Terris-Thule flag line, not confirmed).

1) Go to Aid Grimel at the top of the library elevator in Plane of Knowledge and say “i have skill in brewing”. You’ll receive

You can repeat this phase to him later if you fail a combine.

**If he doesn’t speak to you you’re either not far along enough in PoP progression or your Brewing skill isn’t high enough. Must be 220 unmodded.**

6) Go back to Aid Grimel at the top of the elevator in PoKnowledge. Give him

Clay Signet. You can now move onto Quest #3: Jewelcrafting. 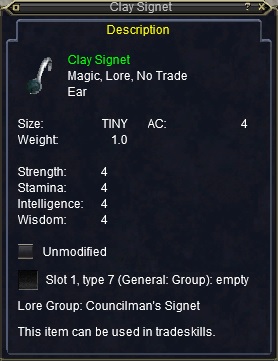